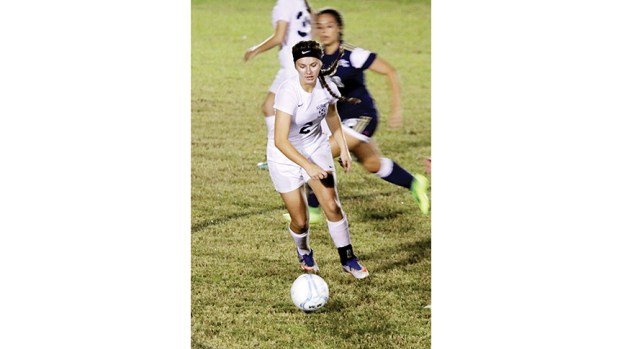 Photo by Terri Mabile Junior Madi Miller scored four goals for the Brookhaven High Lady Panthers on Tuesday night in a region opening 8-0 win over Natchez. Miller and the Lady Panthers are back at home on Friday when they host Lawrence County on King Field.

The Brookhaven High soccer teams kicked off region play on King Field with a pair wins over the Natchez Bulldogs Tuesday night. In the girls’ game the Lady Panthers shook back from a slow start to take a 8-0 victory. The Panthers also turned in a dominate performance on their way to a 5-1 win in the boys’ match.

Junior Madi Miller got the Lady Panther (3-7-1) offense cooking with four goals on the night. Senior Kat Wallace also posted a hat-trick with three goals in the win. Leyton Roberson also added a goal for a BHS team that picked up their second straight win. Junior goal keeper Maddie Brabham secured the shutout for BHS.

The Lady Panthers are now 1-0 in region play and will play the remainder of their division games after the Christmas break. BHS is joined in Region 6-5A by Natchez, Wingfield, and Forest Hill.

“We had a slow start, but we played well overall,” said BHS head coach Kevin Bower. “It was a physical game at times and both teams showed good sportsmanship.”

The Panthers (4-6-1) also picked up their second straight win with the victory over Natchez. Senior Samari Stewart scored a hat-trick for BHS. Anderson Turpin and Cory Patterson also notched goals for the home team.

Brookhaven won their region last season with a goals-differential tie-breaker over Forest Hill. It would appear that Forest Hill (4-3-1) will once again be the strongest team in the region besides Brookhaven.

“The boys started off slow, but quickly matched the intensity of Natchez,” said BHS coach Aaron Ayers. “After gaining control of the game, they played very unselfishly with their passes. Key passes from Anderson Turpin and Cory Patterson led to goals being scored. I’m really proud of how we played.”

On Friday night, BHS will conclude the 2018 portion of its schedule with a matchup against Lawrence County. Both Cougar teams are having strong seasons in Monticello.

The Bogue Chitto Bobcats traveled up Hwy. 51 on Tuesday night for a matchup with the 3A Wesson Cobras. In... read more