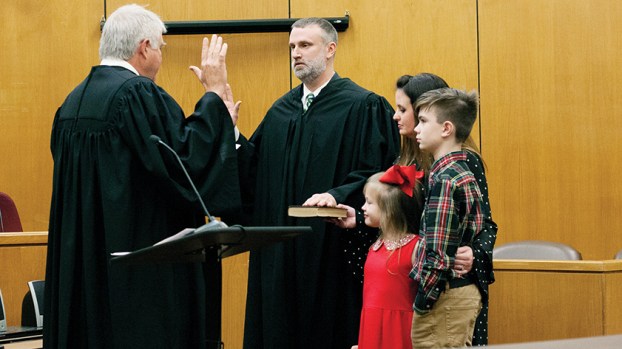 Photo by Adam Northam Joseph Durr is sworn in Thursday as chancery judge by retiring judge Ed Patten, as Durr’s wife and children stand by him in support.

Durr sworn in as chancery judge

Which is good, because his predecessor, retiring judge Ed Patten, kept it nice and light, almost light as air. He told a long joke, pointed and squinted at someone whose cell phone rang in the middle of his opening remarks, like a day in court, and when Durr couldn’t immediately find a Bible to lay his hand on and swear his oath, the old judge poked fun at that, too.

“Aw, just get a rule book,” Patten said as the 60 or so guests of the ceremony giggled. “That’s the court Bible, anyway.”

They skipped the rule book. A tattered old copy of the Word was dug out of the high seat of the judges in the Lincoln County Circuit Courtroom where the ceremony took place and, with his family at his side, Durr stretched his left hand across the Scripture, raised his right hand in the air and repeated his oath of office to become the next chancellor of the 15th Chancery District for Copiah and Lincoln counties.

“It’s a privilege to stand here today as your chancery judge. Today is the highest honor of my professional career,” Durr said, garbed in a new black robe. “Judge Patten taught me something invaluable — how to practice law the right way, and I’m forever thankful to him. I will be fair, impartial and open-minded. Like Paul said in Romans, every man is given a gift according to the grace of God. My prayer, and my promise to you, is that I will serve well as chancery court judge.”

Thursday’s oath of office sends Patten into retirement after 20 years of service and brings in Durr, who will officially take office when the chancery court resumes after the Christmas break on Jan. 2. He ascends to the position after winning a four-year term in the non-partisan election on Nov. 6 by defeating challenger Renee Harrison Berry 11,530-8,420.

Durr has 13 years’ worth of experience as a family law attorney and has served as a prosecutor for both Brookhaven City Court and Lincoln County Youth Court, board attorney for Brookhaven Academy and a special master for the chancery court over which he now presides.

As chancery judge, he will administer matters of equity, mostly family law issues such as custody, divorce, commitments and guardianships.

“The hard part is just beginning,” Durr said. “I’ll be making decisions involving very emotional issues, and it will be a new challenge moving from litigator to an impartial, neutral judge. But I have a strong prayer group, a strong support group. I’m very grateful and humbled the citizens of Lincoln and Copiah counties trust me in this position, and I won’t disappoint them.”

No one witnessing Thursday’s ceremony knew the challenges facing Durr as well as his predecessor, who gave the new judge some advice in his opening remarks.

“Commit yourself to excellence in public service,” Patten told Durr. “Excellence is the key. Doing all the little things right brings about excellence, and that’s what’s expected of you. The people elected you and expect personal responsibility. We have a duty to live our lives recognizing right and wrong are absolutes.”

Patten concluded his remarks by urging his successor to remember the wisdom of the Old Testament, quoting Zechariah 7:9.

“Administer true justice — show mercy and compassion to one another. That’s about all there is to do in chancery court,” he said. “If you do that, you’ll achieve excellence.”

After the ceremony, Brenda Hall made her way through the line to shake Durr’s hand and hug his neck. Slain Lincoln County Sheriff’s Deputy William Durr, second cousin to the new judge, was her son-in-law.

Amber Bowman, a crisis specialist with Region 8 Mental Health Services, also took time to congratulate the judge with which her organization will be working closely for the next four years.

“We look forward to our future endeavors, and we’re very excited about this relationship,” she said.

The Lincoln County school board has hired a security firm to root out students who are illegally attending schools in... read more