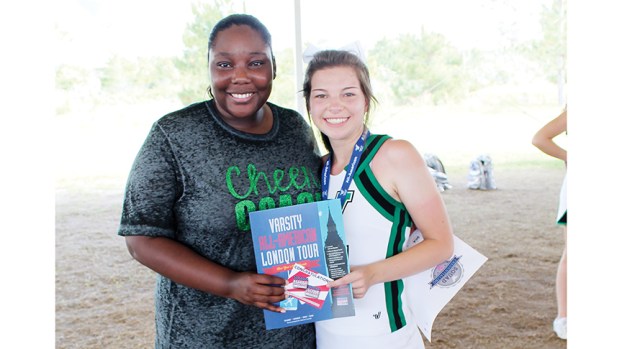 Photo submitted Lauren Middlebrooks will be heading to London Wednesday to cheer in the New Year’s Day parade. Pictured are, from left: Cheer coach Dedra Edwards and Middlebrooks.

It’s cheerio for West Lincoln cheerleader off to London

A West Lincoln cheerleader’s Christmas present is so big it won’t fit under her tree and will allow her to enter 2019 six hours ahead of her family.

Senior Lauren Middlebrooks is leaving for England the day after Christmas as a representative of the All-American cheerleading squad of the United States, shaking her red, white and blue pom poms on the streets of London New Year’s Day with more than 800 other cheerleaders from all over the country. It’s estimated she’ll perform before a million spectators in London plus 20 million TV viewers across the globe.

“Coaches and staff select people they think have the skill to be an All-American cheerleader,” she said.

Cheerleaders are chosen based on superior athletic and leadership skills. Only the top 12 percent of athletes who attend camp earn the chance to perform in the holiday spectacular.

The girls were emailed a YouTube link of routines to practice prior to arriving in London. They will have the opportunity to rehearse with the other participants in between touring London attractions including Windsor Castle, the Tower of London and London Bridge, which can be seen from her hotel room. The group will also enjoy a performance of the musical, “Wicked,” on London’s West End.

Varsity Spirit sets up the agenda, books the hotel rooms, and arranges for meals and certain tour programs, but the expense of the trip — around $3,500 — is the responsibility of the girls.

Middlebrooks’ grandparents, Joan and Charles McHenry, are accompanying the teen on the trip. This will be Middlebrooks’ second visit to England. The McHenrys lived there for several years and they took the family to England last year for a trip.

This go around, they plan to take their granddaughter on a Harry Potter tour as well as a visit to Highclere Castle where “Downton Abbey” was filmed. The TV show is a family favorite. They also want to show her their old home.

Middlebrooks loves the culture of England but not necessarily the food, she said. She prefers McDonald’s and Starbucks to a British pub.

Joan McHenry was not surprised Middlebrooks was chosen for the trip.

“She’s athletic and she’s got a beautiful smile,” she said. “She’s just an all-around great kid.”

Middlebrooks hopes to continue cheering after she graduates from West Lincoln in May. She’s planning to attend Southwest Mississippi Community College for two years, then head to University of Mississippi to pursue a dental degree.

Durr sworn in as chancery judge

Newly-elected chancery judge Joseph Durr said he didn’t want his swearing-in ceremony to be solemn and serious. Which is good,... read more