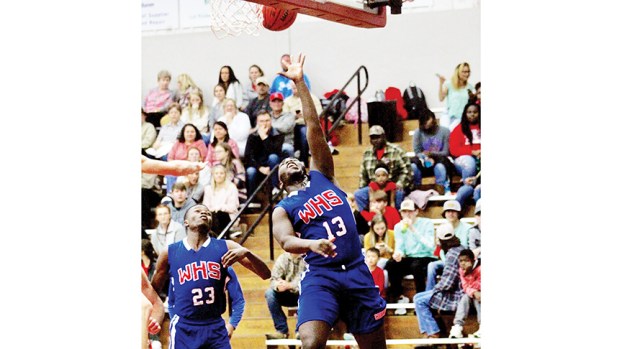 Photo by Katie Furr Wesson junior guard Darrian Gibson scored 10 points for the Cobras on Thursday night in a 68-65 win over North Pike. 13-1 Wesson returns to the court on Dec. 27 when they take on Germantown in the Pearl Holiday Tournament.

“The game was really great for us,” said Lady Cobras junior Shelbi Maxwell. “We played great defense and offensively we kept moving the ball and slowed down the game. We didn’t get the win, but we played a whole lot better than what we have been.”

North Pike opened the game going on a four-point run before Lady Cobras senior Nekevia Frye got Wesson on the board, hitting one of two free throws.

The Lady Jaguars would try to pull away from Wesson, going as far as holding an 11-3 lead, but the Lady Cobras kept fighting to stay in the game.

Holding onto a 14-7 lead heading into the second quarter, North Pike started to build onto their lead, going up 20-9 with two minutes played in the second.

The Lady Cobras would continue to try to cut into the lead, but the Lady Jaguars defensive pressure was able to keep them out front.

Down by a large margin, the Lady Cobras opened the second half hitting a five-point run before the Lady Jaguars could find the net.

Grabbing a defensive rebound, Wesson freshman Ki’onna Gibson hit her basket to try to erase the hole the Lady Cobras were in.

North Pike was up 41-27 going into the final frame of the game.

The Lady Cobras fought throughout the fourth to try to steal the game, but in the end came up just shy, as the Lady Jaguars held on for the win.

“Tonight was the first night we played all four quarters the way we should,” Lady Cobras coach Michelle Nunnery said. “We played with intensity and a no-fear attitude. Before we head into division play, I wanted to see the intensity. If we bring the intensity into the Tylertown game, I think we can surprise a lot of people. I’m very proud of the girls.”

The boy’s game was a dog fight, as neither team was able to gain much separation due to the pressure that was brought all game long. The game also saw several ties and lead changes, with Wesson pulling out the win with time running out.

“We started bad at first,” Cobras junior Damien Smith said. “We came back at the end and we made big threes and grabbed rebounds to give us the chance to win.”

With five minutes remaining in the first, Wesson was up 6-5. North Pike would keep the game close throughout the rest of the first, as Wesson was holding onto a 17-13 lead going into the second.

The second quarter saw both teams tying and exchanging lead changes, with the Cobras taking a 34-31 lead into half time.

“The defense stepped up when we needed to,” Cobras senior Shemar Dickerson said. “We need to knock down our free throws, they’re a big part of the game.”

Coming out of halftime, Wesson started to get their pressure to work and gain some separation from North Pike.

The Jaguars would fight throughout the third to keep the game close, as Wesson took a 51-48 lead into the fourth.

The fourth saw both teams once again tie the game and exchange the lead.

Cobras senior J.D. Allen would seal the win for Wesson, as he was able to steal the ball and force North Pike to start intentionally fouling in hopes to tie up the game and force overtime.

“This was a good high school basketball game,” Cobras coach Rusty Newman said. “North Pike is very athletic and similar to what we’ll face when we start region play. I was proud of the guys and the way they were able to make the free throws. We made big plays when we needed to and figured out a way to win the game. The boys showed a lot of heart.”