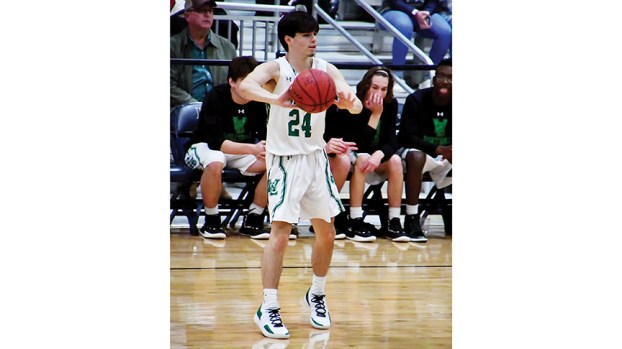 Photo by Stacy Leake Senior Garrison Coffey scored 12 points on four made 3-pointers for West Lincoln in their 85-44 win over Cathedral in Natchez Friday night. The Bears made 20 3-pointers as a team in their final game of 2018.

Here is a look at how area teams played during Friday night high school basketball action.

The West Lincoln Bears went to Natchez on Friday and brought back a sweep of their former region rivals at Cathedral.

“We started out a little sluggish in the first quarter, but our effort picked up and it’s good to end this part of the season on a three-game win streak,” said West Lincoln head coach Brooks Smith.

“At times, I thought it was Larry Bird, Paul Pierce, Steph Curry, and Klay Thompson wearing West Lincoln uniforms the way we made the long ball,” said Smith.

The impressive thing was how many Bears got in on the long-range bombardment. With Cathedral trying to clog up the middle and take junior forward Keshon Byrd out of the game, the Bear shooters made them pay dearly.

Karlton Byrd continued his strong play this season with 29 points, seven rebounds, three assists, and three steals. Byrd knocked down six three-pointers for the Bears. Anthony “Peanut” Hughes was also hot from deep for the green and white as he knocked down seven three-pointers on his way to finishing with 21 points and six assists. Senior Garrison Coffey canned four triples of his own to score 12 points. And to round out the three-point barrage, senior Jatavian Lewis knocked down three to score 12 points. Michael Brothern added six points and Keshon Byrd scored three points while grabbing six boards and blocking three shots. Ty Brothern and Landon Burgess scored one point apiece for the Bears.

“It was great to see the ball go through the net like that as we head into 2019,” said Smith.

West Lincoln returns to the court on Jan. 4 when they host Cathedral for a pair of games. Varsity girls begin at 4 p.m. with the boys’ game to follow. Then on Jan. 5 they will travel to Madison to play St. Joseph for two more games. The Lady Bears get things started against St. Joe at 1 p.m.

The South Pike Eagles gained a measure of revenge on Friday night as they handed the Wesson Cobras (13-2) a 79-67 loss in Willie E. Jones Coliseum. Wesson held a 32-30 lead at halftime before a big South Pike third quarter in which the Eagles outscored the Cobras 25-12.

“South Pike shot it well,” said Wesson head coach Rusty Newman. “It felt like they made every three-pointer they shot. We cut it to six points late in the fourth quarter, but we couldn’t get a shot to fall after that.”

The Cobras will now have a few days of rest before taking part in the Pearl Holiday tournament that begins on Thursday. The only losses for Wesson this season are to 5A Brookhaven High and 4A South Pike. They’ll play 5A Germantown and 6A Southaven at the Pearl Holiday Tournament.

“The guys played hard against South Pike,” said Newman. “Shemar and J.D. never came out of the game on Thursday night when we beat North Pike at home. We kind of ran out of gas in the second half against a good team. We’ll play two more good teams next week and then we’ll start region play on Jan. 4 against Tylertown.”

In the girls’ game the powerful Lady Eagles took a 45-15 win over the Lady Cobras. Coach Michelle Nunnery and her team kick off the Pearl tournament on Dec. 27 with a 9:30 a.m. matchup against Pelahatchie. The Lady Cobras will then play on Dec. 28 — again at 9:30 a.m. — against the 6A Clinton Lady Arrows.