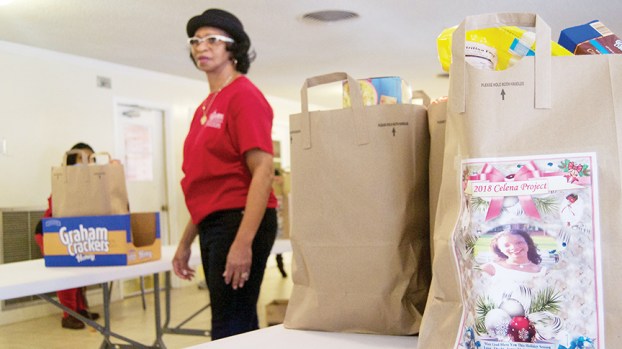 Celena Dalton grew up at St. James M.B. Church, showing her heart for people early on. She loved older folks and wanted to take care of everyone.

And even after her death last month at the age of 47, the nurse practitioner is still spreading Christmas cheer.

Dozens of volunteers from St. James, wearing red T-shirts and big smiles, passed out brown paper shopping bags loaded with groceries Saturday. On each bag was a photograph of Dalton and warm wishes from her church family and pastor, the Rev. Larry Jointer.

The church leader suggested naming the project after Dalton, though she probably wouldn’t want the spotlight shining on her. Her mother, Mary Rowe, said she didn’t want the glory.

“She would probably fuss about it,” Jointer said. “But then she’d say, ‘OK. If it’s going to make the people give, then OK.’”

Donations of non-perishables to fill 261 grocery sacks were donated by church members, people in the community and area businesses. This is the third time the church has held the giveaway. Now that it’s named for Dalton, Jointer wants to make sure they do it every year.

Dalton, who graduated from Brookhaven High School in 1988, started talking seriously about becoming a nurse her freshman year.

She started her studies at Southern Miss, but after the first semester and killer math classes, she switched her major to criminal justice. After graduation, she moved to Maryland to work as a private investigator for an insurance company.

“She called me one day and said, ‘Momma, you don’t have to ever worry about me. I’m not going to school no more,’” Rowe said.

But a momma knows.

Dalton worked for a few years in her field and then called again.

“She said, ‘Momma, I’m going back to school. I’m getting in nursing,’” Rowe said.

She enrolled in an accelerated one-year nursing program at a private Catholic university in Maryland and balanced school and work to get her second degree.

She worked two years at a hospital there then decided to push herself even further. She earned a nurse practitioner degree from University of Alabama at Birmingham.

Dalton moved to Las Vegas, Nevada, not quite two years ago. She had some issues with high blood pressure but no other major health problems.

Shortly before Thanksgiving, Dalton’s older sister, Schennay Day, visited and the two acted like school girls at a sleepover.

“They laughed, talked and loved on each other,” Rowe said. “Celena was fine.”

“We were in shock. We’re still in shock,” her mother said.

When more than 100 individuals from Louisiana were displaced after Hurricane Katrina and took up residence in the church fellowship hall, Dalton sent help in the form of a 40-foot trailer loaded filled with bookbags stuffed with supplies.

“It was loaded from the front to the back with all kinds of stuff for families,” Jointer said.

Dalton also organized health fares for the senior citizens at St. James and in the community.

Dalton also encouraged others in the church to pursue advanced degrees, to never settle for mediocre.

“She never quit,” Jointer said. “That’s what we loved about Celena.”

Christian artist Jasmine Murray, fresh off a tour with Mandisa, is bringing her message of living fearless to Lincoln County.... read more