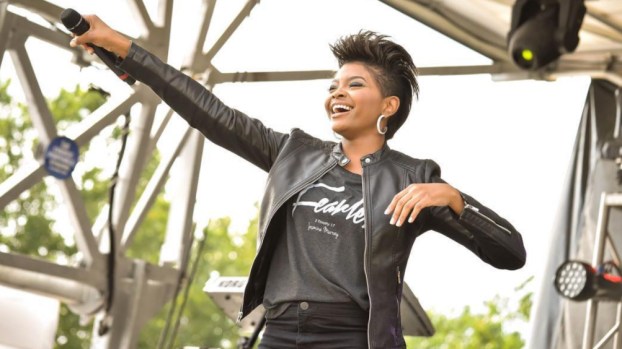 Photo submitted Jasmine Murray performs in an outdoor venue. Murray will be in concert at the Mississippi School of the Arts Jan. 26.

Christian artist Jasmine Murray, fresh off a tour with Mandisa, is bringing her message of living fearless to Lincoln County.

It’s a message Murray wants her fans to hear. It’s also the music Murray, a 2010 graduate of Mississippi School of the Arts, will share at Lampton Auditorium Jan. 26.

Tickets are on sale now for the 7 p.m. show, and can be purchased online at www.msabrookhaven.org. All proceeds will go toward MSA’s operations. Ticket prices are $15 balcony, $25 floor, and $50 VIP tickets on the floor, followed by dessert with Murray in Enochs Hall. Sponsorships are also available.

This is Murray’s first time to perform at MSA since graduation.

She’s curated quite a resume since enrolling at the arts school. She’s an eighth season American Idol Top 13 contestant. As 2014 Miss Mississippi, Murray went on to place in Top 10 in the Miss America pageant and now tops the charts of contemporary Gospel music. She has appeared on “The Ellen DeGeneres Show” and “Live! With Regis & Kelly” and performed at the recent K-Love Awards, where she was nominated for four awards. Her hit single, “Fearless,” was nominated for Breakout Single and Song of the Year and the Mississippi singer was also nominated for Artist of the Year and Female Artist of the Year.

Her performance in Brookhaven will serve as a fundraiser for her alma mater. The night will open with a performance by Total Praize, MSA’s student-led gospel choir, which is now in its seventh year.

“I am thrilled to have Jasmine return to our community, said MSA Executive Director Suzanne Hirsch. “Her success is well deserved. I believe this is just the beginning of what we will see from her.”

Murray’s discipline at MSA was vocal music, but she took dance classes under Tammy Sanford, learning improv and jazz.

“I can remember my first day being super terrified,” she said.

The studio was intimidating so she gravitated to the back of the room to hide in the back row.

“I didn’t want anyone to see me dance,” she said.

That all changed when the Columbus native immersed herself in the MSA experience.

“I can remember my senior year how I felt so much more comfortable and I wanted to be in the front all the time. I grew to really, really love it,” she said. “I think that’s the really neat thing about MSA, is you get a chance to cultivate these students’ talents and highlight what they’re good at, highlight their passions and see them blossom right before your eyes and see the progress. I definitely saw that in myself.”

Murray is thrilled to be able to raise money for the campus.

“It’s a very well-rounded school,” she said. “There’s so many things to choose from. They cater to so many different students with so many gifts and passions and that’s really amazing.”

She hopes to be able to mentor the students there during her visit.

The audience at Murray’s show can expect to hear music from her first album, “Fearless,” as well as some worship covers.

“I think it’s going to be good,” she said. “Hopefully, it will be a chance for everyone to just sing and worship and just enjoy their time together and enjoy music. I’ll be able to share a little bit of my testimony with everybody.”

She worked hard to create an album she’s proud to release.

“I feel like I’ve poured so much of my life and so much of my heart into it,” she said. “I feel like the Lord just gave me things he wanted me to say and I’m so blessed that I was able to do that and put it in the songs, and I can’t wait to share that with everyone.”

Murray has met several of her favorite musicians and performed with a few, like Crowder, Danny Gokey, Mandisa, 7eventh Time Down and Tauren Wells.

Singing with Crowder and Wells was mind-blowing, she said.

“It’s one of those moments where you look around and you’re like, ‘Oh my gosh, this is really happening,” she said.

She credits God for opening doors and connecting her with people who gave her the opportunities she write, record and perform.

“I am constantly in awe because he is so good,” she said.

What kind of gifts do a bunch of 9- and 10-year-olds give to residents of a nursing home? It doesn’t... read more