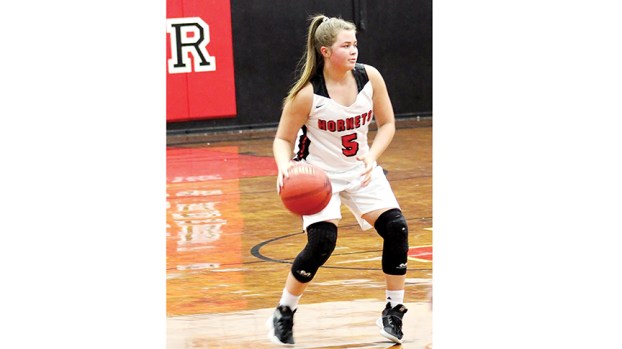 Photo by Katie Furr Loyd Star junior guard Carly Beth Wallace led the Lady Hornets with 17 points in their 56-28 win over Pisgah on Friday night. Loyd Star led 27-21 at halftime before blowing out the Lady Dragons in the second half.

“We all shot a lot better than what we have been shooting,” Lady Hornet Taylor Smith said. “When we get up, we do tend to slack off a little bit.”

After a back and forth defensive start to the game, Loyd Star’s Aubrey Britt hit the game’s first basket.

By halfway through the first period, the Lady Hornets were up 11-1, and Loyd Star took a 16-9 lead into the second quarter.

The Lady Hornets opened up the second quarter hitting a 10-point run before the Lady Dragons could find the net off a three-pointer by Faith Ashley.

“We got off to a good start,” Lady Hornets Carly Beth Wallace said. “But we laid back after we were up. We really stepped up at the end.”

Three minutes passed in the third before either team would score. Stealing the ball, Wallace drove down court for a layup that broke the scoring drought.

Although the Lady Dragons tried to fight back into the game, they were outshot 17-5 in the fourth period.

“I thought we had a good first quarter,” Lady Hornets coach Christi Terrell said. “We kind of backed off in the second quarter. It took us to about halfway through the third to pick back up and play consistent. A lot of our problem is (staying) consistent. We need to keep the tempo up on defense and do a better job controlling the other team’s offense. Overall, I’m proud of the girls and their effort.”

Loyd Star will return to the hardwood Jan. 8 when they take on region opponent Bogue Chitto.