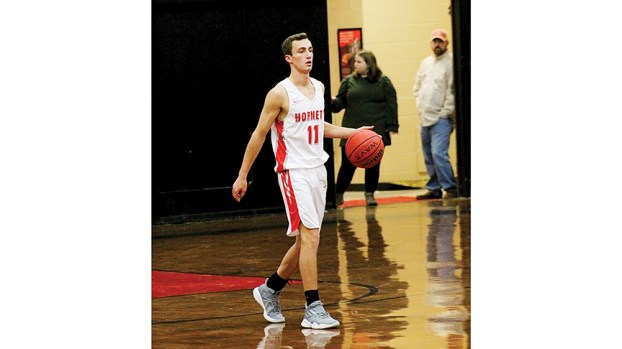 Photo by Katie Furr Senior point guard Jett Calcote led Loyd Star with 14 points and eight rebounds in their 71-68 overtime loss to Pisgah on Friday night. Calcote and the Hornets return to the court on Jan. 8 when they travel to Bogue Chitto.

Four quarters weren’t enough for the Loyd Star Hornets (8-7) and the Pisgah Dragons (9-4) Friday night, as it took overtime for the Dragons to win 71-68 at Loyd Star.

“We thought we had the win and just slowed down a little bit,” Hornets senior Jett Calcote said. “Pisgah started coming back and they were able to make shots when we couldn’t.”

The Hornets led 18-7 at the end of the first. They tried to gain separation, but the Dragons kept fighting back, as Loyd Star led 27-16 at halftime.

Coming out of halftime, Loyd Star ran with an eight-point scoring run before Kentrell Gates of Pisgah drilled back to back three-pointers.

Loyd Star took a 46-34 lead into the final frame of the game. The final quarter would see both teams tie and exchange leads several times.

With the game on the line and one second remaining, Loyd Star called a timeout to try and draw up a game-winning play.

The Hornets were unable to sink the basket, sending the game that was tied up 62-62 to overtime.

Overtime would once again see both teams trading the lead. Hitting his three-pointer, Gates sealed the win for the Dragons.

“I’ve got to tip my hat to Pisgah,” Hornets coach Seth Britt said. “They got hot in the fourth quarter and were able to score 26 points. They outplayed us in overtime and we missed eight out of nine free throws. When you miss that amount, you’re not going to win many ballgames, especially close games.”

Loyd Star returns to the court Jan. 8 when they travel to play region foe Bogue Chitto.