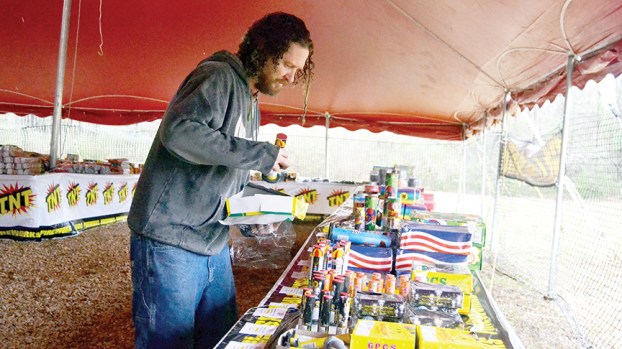 Kick off the new year with a bang, using fireworks safely

Rain throughout the week could cause fireworks sales to fizzle.

“If the wet stuff is still falling it slows down a bit,” said Jimmy Barrow, store manager of Robbie’s Fireworks on Hwy. 84. Barrow has been manager of the store under the tent — where a giant inflatable gorilla greets customers — for six years, though the business has been there a few years longer, he said.

He’s hopeful the weather will clear up enough that customers will come trade their cash for colorful explosives. Even if it doesn’t, he expects many will stockpile and do their exploding later in the week.

Meteorologist Daniel Lamb with the National Weather Service in Jackson said Lincoln Countians should tote umbrellas into New Year’s Day. Rain is expected today, Sunday and Monday. Showers may let up by late afternoon and early evening in time for the last countdown of the year.

“There’s a chance the rain will be out by then. Then there will be a little bit of a break,” he said.

Rain is expected New Year’s Day and into the middle of the week. “It’s a pesky front. It keeps wavering back and forth,” he said.

Lamb sees a chance for winter weather the first week of the new year, though it’s still a bit too far away to predict.

“It’s coolish, but still not cold,” he said.

If you plan to welcome in 2019 with a bang, there are a few things to remember. First off, it’s illegal to shoot them in the city, but OK in the county. Just don’t wait too late at night — or early in the morning — to light the fuse.

“We don’t get a lot of fireworks complaints,” said Lincoln County Sheriff Steve Rushing. “If we do, it’s late at night, some time after midnight.”

Rushing urges neighbors to be courteous.

“Try to be respectful of your neighbors when you shoot them,” he said.

Statistics from the National Fire Protection Association indicate that fireworks cause an average of almost 18,500 reported fires a year.

“Anyone choosing to handle fireworks this holiday needs to be especially mindful of proper safety precautions,” Chaney said. “In particular, you need to be careful if young children are around as they are often more likely to get hurt.”

The risk of fireworks injury is highest for young people ages 0-4, followed by children 10-14. Sparklers, often a favorite with children, accounted for 30 percent of injuries in 2014, they can reach up to 1,200 degrees, which is hot enough to cause third-degree burns.

Chaney added that anyone using or planning to be around any type of fireworks should also be mindful of their pets.

For those choosing to use fireworks, Chaney suggests you follow these safety tips:

• Observe local laws. Fireworks are legal in the county, but not in the city.

• Use common sense and always read and follow the directions on each firework.

• Never point or throw fireworks at another person.

• Buy from reliable fireworks sellers. Store them in a cool, dry place.

• Always have an adult present when shooting fireworks.

• Put used fireworks in a bucket of water and have a hose ready.

• Only use fireworks outdoors, away from homes, dry grass and trees.

• Light only one item at a time and keep a safe distance.

• Never experiment or attempt to make your own fireworks.

• Never give fireworks to small children.

• Never carry fireworks in your pocket.

A Brookhaven man hiding out from a handful of city and circuit court warrants was arrested at a home on... read more