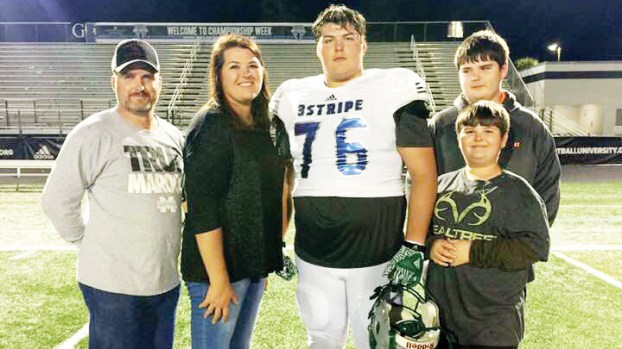 West Lincoln freshman offensive lineman Jackson Taylor recently took part in the FBU Freshman All-American Bowl in Naples, Florida. Taylor was selected for the game from among a group of 4,000 applicants. Billed as a game that features the top 70 freshmen football players in the nation, Taylor and Team 3Stripe won a convincing 40-7 victory. Pictured are, from left: Josh, Amanda, Jackson, Zackary and Weston Taylor pose on the field at Gulf Coast High School after the 2018 FBU Freshman All-American Bowl. The Taylor family made the 14-hour drive together to Naples for Jackson to participate in the game.

Jackson Taylor and his family weren’t seeking out an all-star game for the freshman offensive lineman to play in after the high school season ended.

However, an all-star game found them. The West Lincoln Bear recently took part in the Football University Freshman All-American Bowl in Naples, Florida.

During the summer, Taylor had been invited to attend the Southern Elite Top 150 Combine in Brookhaven after a strong showing at a camp at Ole Miss. After the Brookhaven combine, regional scout Marcus Dent told Taylor’s parents, Josh and Amanda, that he wanted to nominate Jackson for the FBU Freshman All-Star game. The event draws around 4,000 applicants each year, with the nomination process beginning in September.

In late August, Dent reached out to the Taylors and let them know they needed to upload game film of Jackson and complete an online form. After seeing the 6-foot-4, 310-pound Taylor on film, national scout Erik Richardson called the Taylors to let them know that Jackson had been selected for the game.

The game took place on Dec. 19 at Gulf Coast High School. Located south of Fort Myers on the gulf side of southern Florida, the trip to Naples took the Taylor family 14 hours of driving.

A cottage industry of all-star games, combines, seven-on-seven competitions and skills challenges have sprung up as shoe companies pump money into high school football scouting. Some events over-promise and under-deliver on what they will provide their participants.

That wasn’t the case with the FBU game, though. The teams were decked out in head-to-toe Adidas gear. Most of the coaches had experience in the NFL or at the highest levels of college football. The accommodations and facilities were top-of-the-line as well.

The Wesson Cobras (14-2) took the best shot the 5A Germantown Mavericks (3-10) gave them on Thursday in the Pearl... read more