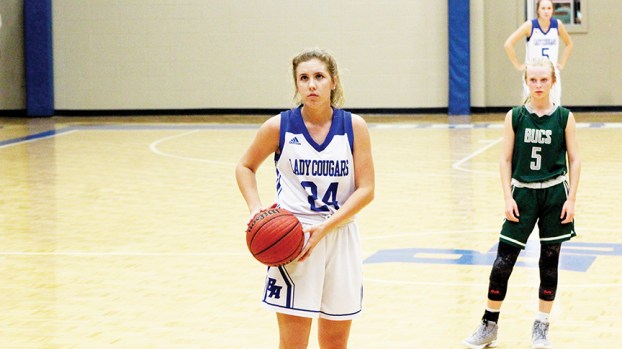 Photo by Cliff Furr Brookhaven Academy senior guard Jana Case scored 21 of her teams points in a 40-29 loss to Wayne County High School at the Biloxi High School Tournament on Friday. Case and the Lady Cougars next play at home on Jan. 8 when they host Adams County Christian School.

Here’s a look at how area high school basketball teams fared in the early games from Friday holiday tournament action.

The Brookhaven Academy Lady Cougars (9-4) had an early tip on Friday at the Biloxi High Tournament against MHSAA 5A Wayne County. The War Eagles took home a 40-29 win over the Lady Cougars at Biloxi Junior High. A size advantage gave Wayne County too many put-backs inside for the Lady Cougars to overcome although BA did everything they could to keep it close at the end of the game.

“We cut it to eight with three minutes to go with the ball and couldn’t convert,” said BA coach Jason Case. “Proud of how the girls played.”

BA comes back from the holiday break with games at Presbyterian Christian on Friday and a trip to Jackson Prep on Saturday.

The Cobras (15-2) capped a great showing at the Pearl Holiday Tournament with another close win over a larger school. On Friday Wesson took home a 64-63 win over 6A Southaven from Desoto County.

Wesson jumped up 24-11 first quarter lead against the Chargers. It’s becoming difficult to come up with adjectives to describe just how well Wesson senior guard J.D. Allen is playing of late. On Friday Allen scored 20 points in the first quarter on five-of-six shooting from the 3-point line.

Allen finished with a team high 29 points in the win. Southaven trailed Wesson by three points at halftime before fighting back to hold a two-point advantage to start the fourth quarter. With three minutes left in the game Southaven led by three, before an Allen 3-pointer tied the game back up.

Wesson switched to a man-to-man defense late and got some key defensive stops to seal the win.

“We missed some shots close that we usually would make,” said Wesson coach Rusty Newman. “Southaven was athletic and active and that was something we had to adjust to. I’m proud of our guys in how they faced in-game adversity over these two games at Pearl and how they responded to make the plays we needed to win.”

Wesson defeated 5A Germantown in OT on Thursday.

Wesson kicks off Region 8-3A play on Friday, when they host the Tylertown Chiefs in the Snake Pit.

The Lawrence County Cougars were in Bay St. Louis on Thursday and Friday for the Christmas Invitational hosted by Bay High.

The Cougars dropped two heartbreakers on the boys’ side, both in overtime. On Thursday night the Cougars lost 58-55 in OT to the host Bay High Tigers. On Friday the Gautier Gators took a 53-51 win over the Cougars.

On Thursday the Lady Cougars dropped a 40-35 decision to the unbeaten Pass Christian Lady Pirates. The Lady Cougars bounced back on Friday to take a 52-30 win over D’Iberville.

The Cougars begin Region 7-4A play on Friday when they host Greene County.

Jackson Taylor and his family weren’t seeking out an all-star game for the freshman offensive lineman to play in after... read more