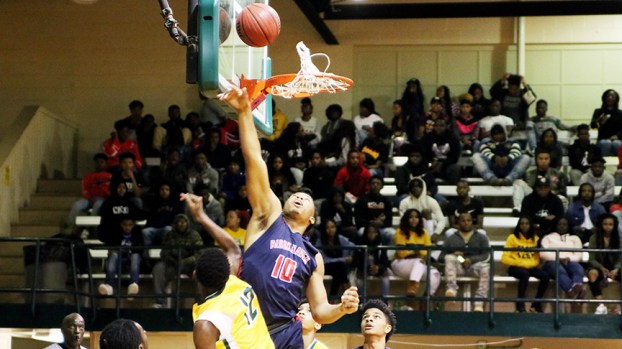 Photo by Becky Green Brookhaven High forward Kedarius Wells blocks a shot at the rim against McComb. Wells and the Panthers travel to Natchez on Friday for their region opener.

The Brookhaven High Panthers went a perfect 4-0 over two days to sweep the McComb Coca-Cola Tournament.

The Panthers were first matched up with the homestanding McComb Tigers. In the girls’ game the Lady Panthers took home a 59-45 win. In the boys’ game the Panthers held off McComb 41-40.

In the boys’ game the Panthers (14-2) got a team high 21 points from senior Lafollette Bogan. It was the ninth time for Bogan to top the 20-point plateau in his senior season. He also grabbed 12 rebounds and senior forward John Hilbert snatched 11 rebounds as well. Hilbert also chipped in four points. Senior Axavian Jones scored seven points for the Panthers and sophomore La’Darius Thrasher added five points. Kadarius Wells scored three points and Caleb Edwards rounded out the Panther scoring with one point.

BHS begins Region 6-5A play Friday, when they travel to Natchez High for a matchup with the Bulldogs. The Natchez Lady Bulldogs currently sit 8-7 and the boys’ team holds a record of 9-5.