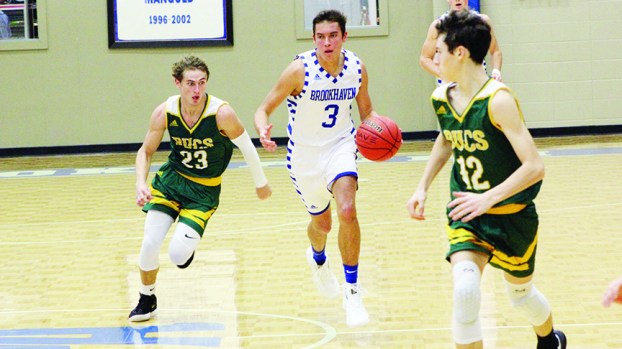 Photo by Cliff Furr Brookhaven Academy senior forward Cade Brown scored a team high 15 points for the Cougars in a 71-22 win over East Rankin Academy at the Columbia Academy Tournament.

The Brookhaven Academy Lady Cougars (10-4) topped Raleigh High 55-49 in their matchup at the Biloxi High Tournament last weekend. The BA boys’ team captured a pair of victories at the Columbia Academy Tournament with a 71-22 trouncing of East Rankin Academy and a 63-52 victory over Hillcrest Christian.

In the win over Raleigh, Jana Case led BA with 31 points and 13 rebounds. The Lady Cougars led by as many as 20 before a late Raleigh rally cut the score down late. Freshman point guard Anna Brantley Warren scored 11 points and handed out seven assists. Madison Moak scored nine points for the Lady Cougars.

In the win over Hillcrest the Cougars (13-1) were led by Flowers with 18 points and nine rebounds. Thurman had the hot hand from deep as he canned 17 points after knocking down five 3-pointers.

BA will travel to Presbyterian Christian in Hattiesburg Friday. There will be six games against PCS with seventh grade games beginning at 2:30 p.m.

On Saturday, the Cougars head to Lakeland Drive for four games against Jackson Prep with junior high girls starting at 2 p.m. and the varsity girls playing at 4 p.m. BA returns to John R. Gray Gymnasium on Jan. 8 when they host Adams County Christian School.

Hints for fishing in winter and early spring

Here are some hints for fishing during the winter and early spring at area lakes. Calling Panther Lake Largemouth bass... read more