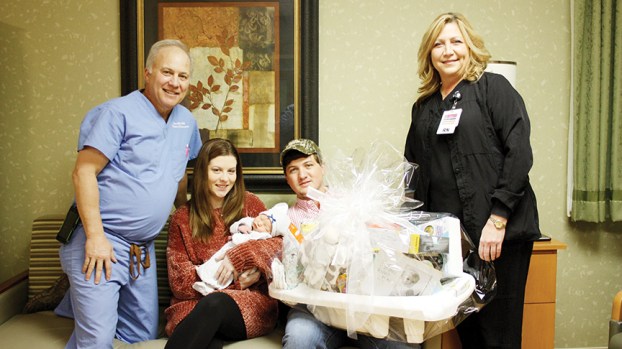 Photo submitted/Anna and Craig Smith of Loyd Star welcomed their firstborn, Myles Craig Smith, into the world at 1:59 a.m. Tuesday. He’s the first baby born at King’s Daughters Medical Center in 2019. Pictured are, from left: Dr. Steve Mills of Brookhaven OB-GYN and Associates, Anna and Craig Smith with Myles and Angie Williamson, director of the Labor, Delivery, Recovery and Postpartum Room at KDMC.

The first baby of the new year in Lincoln County is also the first baby for a couple of high school sweethearts who were excited to begin the first day of 2019 as a family of three.

Anna Smith can’t see anything but perfection when she looks at the baby she carried for nine months.

Her due date was today, but her gynecologist, Dr. Steve Mills of Brookhaven OB-GYN and Associates, told the couple it might be fun to be parents to the New Year’s baby and he could induce labor if they wanted to try. Smith checked into KDMC Monday morning to get settled in, then was given drugs after lunchtime that would induce labor. There was a chance the couple’s firstborn could be the last born of the year, but after an epidural and a bit of pushing, Myles made his way into the world after midnight. He weighed 7 pounds, 5 ounces and measured 20.5 inches in length.

The couple has been together for six years, and married for a year and a half. They’re both 22 and graduated together, but at different schools. He was a Loyd Star Hornet. She was a West Lincoln Bear.

Myles will be a Hornet if it’s left up to his momma.

They picked the name Myles because Anna liked it. His middle name is for his father.

They’d eventually like to add at least two more to their brood, but the young parents are in no hurry.

“I just want to enjoy time with him as long as possible,” she said.

Myles’ grandparents are Rickey and Kim Smith, Joel and Tonya Stephens and Chad and Lori Brown.

Over the past year, The Daily Leader has published dozens of stories that can be called “feel good” stories. Here... read more