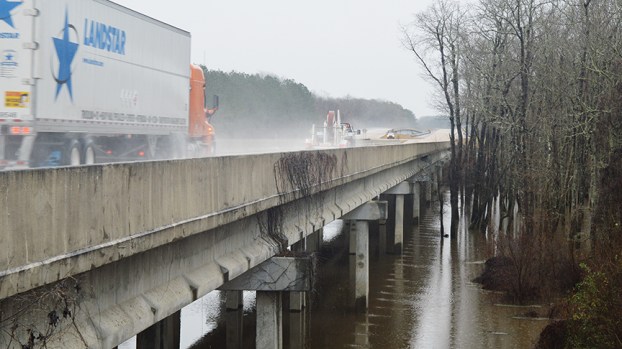 Photo by Gracie Byrne The Pearl River at Monticello was recorded at 25.6 feet high Thursday, and is expected to crest Friday at 27.6 feet.

The Pearl River at Monticello is expected to crest early Sunday at 27.6 feet, a level that will lead to additional flooding of some roads and farmland.

The river was at 25.6 feet Thursday. Atwood Water Park, which is currently empty, is expected to be closed today due to the rising water.

“We are expected to go to 27.6 at Monticello,” Lawrence County Emergency Management Director Tony Norwood said. “This could put water up at Atwood Water Park and on some roads but not any residential areas.”

Norwood says Lawrence County is often affected by the rainfall that occurs north of the county, in areas such as Rockport and Georgetown.

“There is absolutely nothing we can do at this point,” Norwood said. “If you run into any flooded roads, don’t drive across them.”

Flooded roads should be reported to authorities and should not be driven on for any reason.

Within the town of Monticello, the danger of flooding is not as imminent.

The only specific areas expected to flood in Lawrence County and Monticello are Atwood Water Park and Cooper’s Ferry Park, and this level of water is seen as normal in these areas. At 28.5 feet, Atwood would be under water. The river is not expected to reach that level.

“If the Bogue Chitto is out of its banks, your water can’t go anywhere,” he said.

Lewis said drivers should expect to see excess water on the roads that usually flood in heavy rains.

“Since before Christmas crews have been working on sewer lines and ditches trying to keep  everything from stopping up and steadily running,” he said.

A family of beavers caused problems along I-55 Thursday as drivers noticed water pouring into a ditch from a pond on the other side of a treeline near exit 42.

“Beavers have the spillway jammed up and with all the rain, the water rose in the pond and it’s coming out the beaver holes,” said Lincoln County Emergency Manager Clifford Galey.

Landowners planned to bust the beaver dam today to relieve the pressure, he said.

Motorists saw the water leaking out of the pond into the ditch along I-55 and called 911. He was alerted and checked out the situation. Galey called the Mississippi Environmental Quality’s Dam Division for an opinion from dam experts.

“They came down and looked at it and they thought the same thing I thought,” he said.

Galey said busting the dam is the best solution.

Correction: A previous version of this story incorrectly stated that the river would crest Friday.

One man was shot and another arrested on multiple charges following an assault at an eatery on Cephus Williams Road... read more