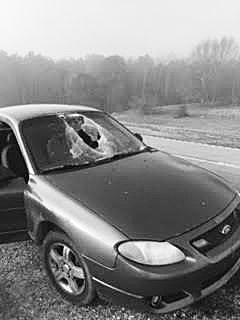 A few more inches to the left and a near miss for a driver of a car hit by a log truck’s load could have ended differently in Lawrence County Monday morning.

Cpl. Brandon Fortenberry with the Mississippi Highway Patrol said it appears that about 7:45 a.m., the 18-wheeler backed up on Hwy. 27 and one of the logs crashed through the windshield of a car behind it. Then the truck drove away. The occupants of the car appeared shocked at the unusual hit and run.

“According to them and witnesses, the 18-wheeler stopped in the roadway, Hwy. 27 at Bethel Road. The car stopped behind it, then the 18-wheeler started rolling backward and rolled into their vehicle,” he said.

Fortenberry said the driver told authorities he couldn’t back up to avoid the logs because traffic behind him on the two-lane highway had him hemmed in. Before anyone could ask the truck driver about what happened, he left.

“The 18-wheeler just put it in drive and drove away,” Fortenberry said.

Astonishingly, the driver of the truck may not even know that it happened.

“It happens all the time,”he said.

No one was injured in the crash and the incident remains under investigation. By law, logs can extend 28 feet — about two car lengths — beyond the rear of the trailer axle, except in special circumstances.

Troopers would like to talk to the driver of the 18-wheeler. If anyone has any information about the hit and run, call 601-8337811.

Fortenberry said collisions with large trucks can be avoided by giving them plenty of space.

An 18-wheeler was involved in a two-vehicle collision Sunday that ended in the death of the one of the drivers.

Fortenberry said Lamar Malloy, 42, of McComb, was driving a 2003 freightliner east on Hwy. 98 and was attempting to make a right turn into a parking lot near Van Norman Curve Road. Thad Taylor, 66, of McComb, was also traveling east on Hwy. 98 in a 2004 Chevrolet passenger vehicle. Taylor’s vehicle came into contact with the rear of the trailer being hauled by Malloy, Fortenberry said. Malloy was not injured.

Taylor was taken to Southwest Mississippi Regional Medical Center, where he was pronounced dead.

A Bogue Chitto man has been charged with murder in the shooting death of a Lawrence County resident whose body was... read more