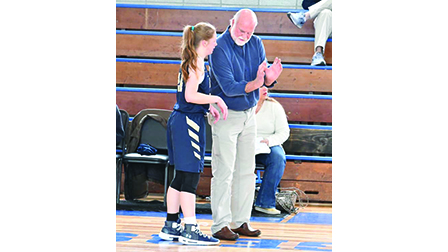 The Bobcats played in a tournament at Newton County on Friday and Saturday, and the Lady Bobcats (12-5) came away with a sweep while the boys’ team picked up one win.

Katelynn Palmer scored 16 points to lead the Lady Bobcats in their win against Newton County. Karly Leake and DeAnna Edwards chipped in nine points apiece for BC.

On Saturday, the BC boys (4-13) would drop a close 44-34 contest to the Union Yellowjackets. The girls’ game was close as well, with the Lady Bobcats holding Union off for a 46-40 win. Kamilah Clay led BC in the Union win with 16 points and Tyuna Brumfield chipped in 14 points.

The Cougars came back from a brief holiday break for road games against two of the largest private schools in the state. On Friday night the Cougars traveled to Hattiesburg to face Presbyterian Christian, and on Saturday they travelled to Lakeland Drive for a matchup with Jackson Prep.

The Lady Cougars beat the buzzer on Friday night to beat the Lady Bobcats in a 47-45 win over Presbyterian Christian. Sophomore guard Makayla Martin hit the game-winner on a drive that came with just 1.4 seconds left in the game. Jana Case led BA with 28 points and eight rebounds, and Emily Claire Felder chipped in 12 points. In the boys’ game, BA fell behind early and never recovered in a 59-46 loss to the Bobcats.

Saturday saw the Lady Cougars (11-5) again locked in a close game, but this time it was the other side that was victorious, as the Lady Patriots held off BA for a 49-47 Prep win. Case again led the BA offense with 25 points and seven rebounds. Felder chipped in 11 points.

The boys’ game went to overtime and saw Prep take a 43-37 win over the Cougars. BA led by four points with 30 seconds left before a Prep rally tied the game and sent it into OT. Dawson Flowers led BA (13-3) with 13 points and 11 rebounds, and Cade Brown added 10 points and seven rebounds.

Lawrence County opened region play on Friday by hosting Greene County. In the boys’ game, the Cougars lost their third consecutive one-possession game, this time falling to Greene County 37-35. In the girls’ game, the Lady Cougars jumped out to a 21-5 halftime lead and never looked back for a 48-24 win.

On Saturday the Cougars played Seminary in the Collins tournament, where the boys dropped a 61-43 decision to the Bulldogs and the Lady Cougars whipped Seminary 47-28.

In a scheduling quirk, the Cougars will play their next five games on the road as they travel to Poplarville tonight for a region matchup and Forrest County AHS on Friday for another region tilt.

West Lincoln came back from the holiday break with a sweep of the visiting Cathedral Green Wave on Friday. The... read more