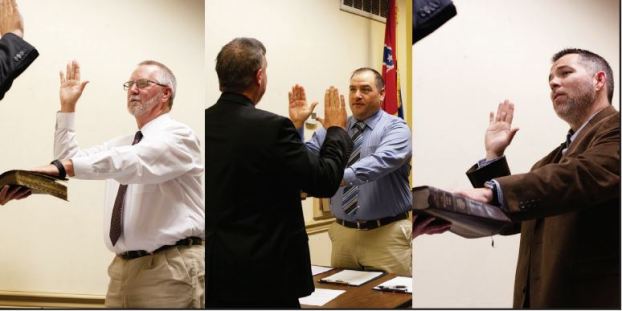 Justin Laird brought a King James Version given to him upon his graduation from high school. The boy named his copy of the Word “King Jimmy.” The man still calls it that.

Monday night, Laird laid his left hand on “King Jimmy,” raised his right hand and recited the oath of office given to him by superintendent Mickey Myers to officially join the Lincoln County

School District Board of Trustees as the representative for Educational District 1. Vaughn followed and became the new voice for District 2, and Cunningham swore his oath next for District 5.

“I’m ready to get started,” Laird said after Monday’s special-called meeting ended. “We have a lot of stuff we need to get to work on.”

Along with District 3 Trustee Brian Magee, appointed to fill a board vacancy in October, the new members constitute a rebuilt unit — District 4 Trustee and board president Diane Gill is the only remaining member from the previous board — poised to make some important calls for the district in 2019.

The board will select the district’s first appointed superintendent this year, deal with slipping school accountability scores, attempt to mend a Lincoln County schools community that has become fractured over test scores and campus-by-campus spending, and decide how to spend around $6.5 million in saved-up construction funds to improve facilities around the district.

The answers to all those questions are not obvious, but the three new members feel confident they can solve the district’s construction crisis. Since their election in November, Cunningham, Laird and Vaughn have met together and agreed to push the board to develop a long-range facilities plan for needed projects.

“The main thing is to get a plan together, a clear, defined path to follow,” Laird said. “A five-year, 10-year, 15-year plan, we’re going to stick to that and have a priority list to work off of. We’re going to have a road map anyone can look at and see where we’re going.”

Cunningham said the new members will start by compiling a list of recently completed projects, reviewing the needed projects submitted last fall by the four principals and making the hard decisions up front — prioritizing them in order.

“Without some kind of vision for the future, you’re pretty much just chasing your tail,” he said.

Once the new board develops its construction plan, plenty of other issues await.

Laird wants to make improvements to the district’s special education programs, and all three campaigned on improving the district’s academic performance — last year’s accountability scores assigned a “D” grade to Bogue Chitto, Enterprise and Loyd Star, while West Lincoln earned a “B.”

“Construction will sort itself out. Academics is the big thing — we have to find some way to get our academics back on track,” Vaughn said. “In the last couple of years it has gone down, and to me, that’s unacceptable.”