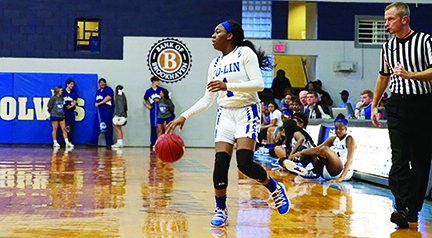 Freshman guard TaMara Riley of Co-Lin looks over the Southern Arkansas University Tech defense on Monday in Wesson. Riley scored 10 points and grabbed five rebounds for the Lady Wolves in their 91-67 loss.

For the sixth year in a row, the Copiah-Lincoln Community College Lady Wolves have won their second semester opener. The Lady Wolves rolled past the Southern Arkansas University Tech Lady Rockets in Mullen Gymnasium to move to 9-1, 0-1 on the year before heading into MACJC play.

The win was the result of four double-digit scorers and the Lady Wolves outrebounding the Lady Rockets 44 to 34. Co-Lin is back on the court the Mullen Thursday as the Lady Wolves host the Lady Bulldogs of Mississippi Gulf Coast Community College. Tipoff is slated for 5:30 and fans can watch the action live at colinathletics.com or listen live at WMJU 104.3 FM in Brookhaven.

The Lady Rockets hung around in the first quarter as the lead traded hands seven times in the opening four minutes of play, and was tied at 16-16 with just 2:13 left in the period. The Lady Wolves rallied and went on a 12-3 run that closed out the quarter and extended into the second to stretch the lead to 28-19 with about seven minutes left in the half. That lead quickly grew as Co-Lin’s point guard, Darien Tubby, made three straight unanswered layups followed by back-to-back three-pointers from Ciara Norwood. At the half, the Lady Wolves led by 14, 44-30.

The third quarter was back and forth as the teams traded baskets. The Lady Wolves poured in 23 points, but the Lady Rockets had their most successful offensive quarter with 22 points. Going into the final 10 minutes Co-Lin led by 15, 67-52.

The Lady Wolves ran away with the contest in the final quarter with big shots Sha’Quandra Carter, Azaria Mage, and Chardonay Williams. The Lady Wolves turned the ball over only 10 times, a season low to help the team secure the 91-67 victory.

Darien Tubby had a breakout game with 22 points, as she was 10-of-12 from the floor. The freshman also led the team with seven assists. Ciara Norwood was 3-of-6 from beyond the arc and finished with 15 points, while Chardonay Williams added 11 off the bench. TaMara Riley rounded out Co-Lin’s top scorers with 10 points. Alexandria Patton came off the bench and hauled in a team-high eight rebounds on the night.

Jakhiya Boston led the Lady Rockets with 20 points after shooting 4-of-4 from three-point range. Devena Smith added 19 points and a team-high eight rebounds for Southern Arkansas.