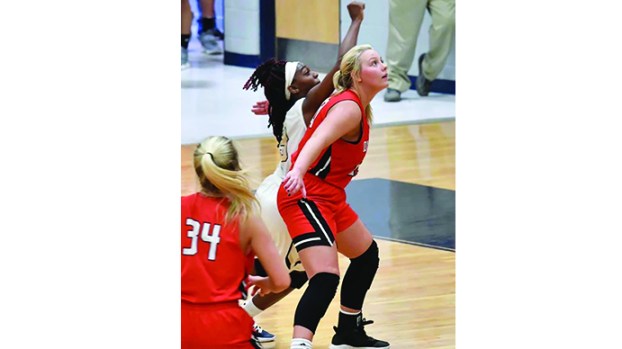 Taylor Smith of Loyd Star blocks out Cheyenne Hall of Bogue Chitto on Tuesday night. Smith scored a team high eight points for the Lady Hornets and Hall chipped in two points for BC in the Lady Bobcats 39-31 win.

“Tonight was a really hard game that we have been focusing on for the whole week,” Lady Bobcats senior Cheyenne Hall said. “We came out and played our plan. We played really good tonight.”

With four minutes left in the first, the game was tied at four-all. The Lady Bobcats would close the first period hitting an 11-point run to lead 15-4 heading into the second quarter.

The Lady Hornets would end their scoring drought on a Carly Beth Wallace basket.

“We played together and played really good team ball,” Lady Bobcats senior Karly Leake said. “This was a big game for us and we played hard and kept our composure better than we did last time.”

Trailing 16-8 with five minutes left until halftime, Wallace would find Christie Patterson for a basket that further cut into the Lady Bobcats’ lead.

Bogue Chitto’s DeAnna Edwards agreed with Leak on playing as a team.

“We all came together as a team,” she said. “The support from everyone, including the crowd, helped build us up and get our confidence back.”

The Lady Bobcats would increase their lead as Leake, Edwards and Tyuna Brumfield each scored baskets late in the first half.

“It was a big region win for us tonight,” Lady Bobcats coach Robby Walters said. “The girls got off to a good, fighting start and played well together. We shot the ball well at times and played good, hard defense. I was very proud of the girls’ effort. We’ve come a long way, but still have a long way to go.”

The Lady Hornets opened up the second half chipping away at the Lady Bobcats’ lead as Paterson nailed a 3-pointer from the left side and would score once more following a steal.

The Lady Bobcats led 31-23 heading into the final quarter of play.

“I thought we were sluggish from the holidays,” said Terrell. “We couldn’t get anything to fall offensively, but that’s not to take away anything from the Lady Bobcats. They played very well and shot the ball extremely well. They made the plays that gave them the chance to win.”

The Lady Bobcats will take a break from Region 7-2A action as they travel to take on Wayne County on Saturday.

The Rockets of Southern Arkansas University Tech had the hot hand Monday night as they defeated the Wolves 89-78. The... read more