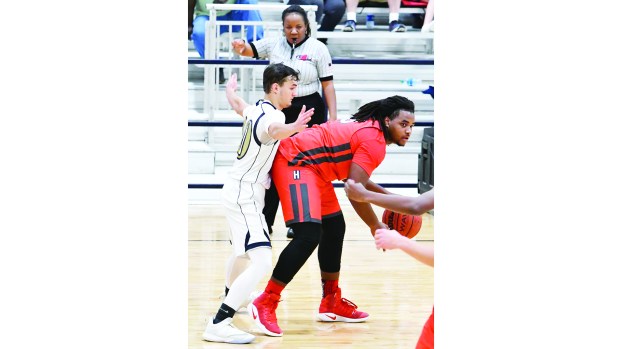 Loyd Star senior Zabien Price controls the ball despite pressure from Cameron Gladdens of Bogue Chitto. Price scored 10 points for the Hornets in the 63-42 win over their region rivals from BC.

Loyd Star showed no sign of being rusty from the holiday layoff early on. By out-shooting and out-rebounding Bogue Chitto, the Hornets were able to take control of the scoreboard. The Hornets’ defensive pressure ensured the Bobcats would have an uphill battle to stay in the game.

“We had three good quarters,” Hornets senior Dane Smith said. “We were off in the second quarter but were able to bounce back. We need to make more shots and play a little bit better defensively, then we’ll be good for region play.

The Hornets would lead 19-7 after the first period ended.

Bogue Chitto would start cutting into the Hornets’ lead in the second quarter, as Loyd Star took a 31-19 lead into halftime.

Leading 41-26 in the fourth quarter, The Hornets continued to apply pressure to the Bobcats offense.

“Anytime you can pick up a region road win, it’s big,” Loyd Star coach Seth Britt said. “I thought we played good, but we still have some improvements to make. I’m proud of the boys and their effort.”

Godbolt and Thomas scored 11 points apiece to lead the Bobcats. Upkins netted 10 points. Lincoln Collins and Cameron Gladden each had four points. Markee Magee finished the scoring for the Bobcats with two points.

The Hornets will host Region 7-2A opponent Enterprise on Friday and Bogue Chitto will travel to Waynsboro on Saturday for a matchup with 5A Wayne County.