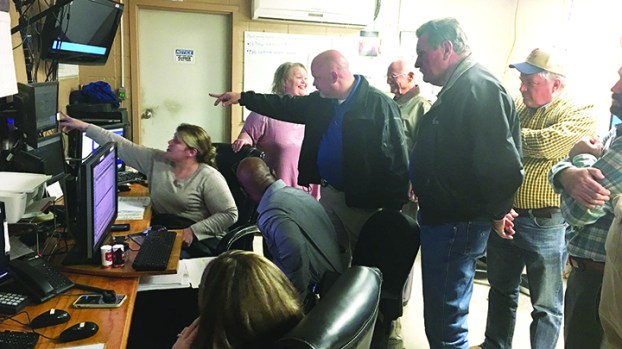 Lincoln County Sheriff Steve Rushing (center) points out the county ‘s 911 system to county supervisors Wednesday during their annual inspection of the jail and sheriff’s offices.

They walked the steel corridors, peered into the locked and caged holding cells. They visited the operations room and saw the camera feeds, looked at the spartan accommodations for the trustys and marveled at “the rubber room,” a single cell with pink padded walls.

They were unable to see the “drunk tank,” because someone was in there.

After a half-hour or so, all five members of the Lincoln County Board of Supervisors completed their annual walk-through inspection of the county jail, tagging along with sheriff Steve Rushing into some of the county’s most-restricted areas to get a handle on one of the most expensive sides of local government. They learned the jail needs a little paint, both elevators are out, last year’s $233,000 roof replacement project stopped numerous leaks and saved the department a lot of trouble, but overhead water pipes in the old half of the jail and sheriff’s office, built in 1982, are causing plenty more.

“There’s constant damage. I’ll bet we’ve had to call a plumber over here four or five times in the last month,” Rushing told supervisors, pointing through a missing ceiling tile to a 36-year-old brass water line that recently rained all over the administrator’s desk. “We’re probably spending $5,000 or $6,000 a year to fix leaks.”

Rushing’s office was nice and dry during Wednesday’s inspection, which took place after a monthly docket meeting that saw Rushing and county administrator David Fields deliver a quarterly financial report for the first three months of Fiscal Year 2019, which began Oct. 1.

The report was something new for supervisors, who have complained about a lack of details in reports made to them in the wake of a state audit that flagged the county for 26 violations, some of them serious. Fields said he was giving the report so supervisors would have enough lead time to amend budgets later — something supervisors have complained they are never given the chance to do, despite being required so by law.

So far, the county is behind a little financially, having spent almost 27 percent of the budget in 25 percent of the year — a common problem caused by early, large purchases and payments that should straighten out by mid-year, Fields said. The county has already paid half its annual insurance costs, passed through around $22,000 in grant funding to King’s Daughters Medical Center’s ambulance service and paid for two elections last November.

But some other factors are driving up the board’s costs.

Fields said the county’s workers’ compensation insurance is increasing by $63,000, and that amount is not budgeted. The price is going up due to major claims — a District 2 worker recently had a $100,000 settlement, and a sheriff’s deputy has remained off-work since May 2017.

The sheriff’s department is also facing expenses from comp time. It’s a small department, with a minimum of three officers per shift, so a limited number of deputies constantly work the 10 annual holidays state law provides and accumulate comp time for later use. County policy caps the time at 150 hours, and Rushing pays off any time over that.

“We’re at 50 percent now, and it could cause some budget problems in the fourth quarter,” he told supervisors. “I’m telling you now because it may require some adjustment later. The only way I see around it is to hire more full-time officers.”

Rushing said two additional full-time officers would allow him to maintain necessary staffing levels and avoid his years-old choice of accumulating too much comp time or paying part-timers to take up the slack. The department currently has 21 full-time officers — counting Rushing and his investigators — and 10 part-timers who fill in as needed.

District 5 Supervisor Doug Falvey was in favor of making the hires.

“You gotta have the people out there to do the job,” he said.

Rushing said he would request the hires before the next fiscal year if he determines more staff would cut down on overall costs.

Speaker to help women ‘listen to the voices in their heads’

A nationally-known speaker, therapist and author is coming to Brookhaven to help women listen to the voices inside their own... read more