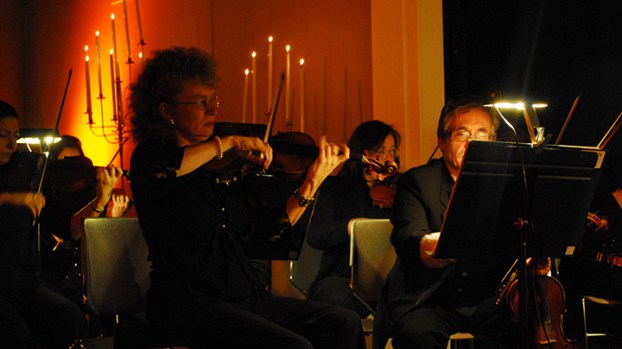 The Mississippi Symphony Orchestra performs a selection of Wolfgang Amadeus Mozart’s best-loved compositions at the Haven during a previous show in Brookhaven.

for the third appearance of the Mississippi Symphony Orchestra’s intimate tribute to Wolfgang Amadeus Mozart at The Haven Friday night.

Tickets are $30 for “Mozart by Candlelight” and although the event is not included in the Brookhaven Little Theatre season, tickets for season pass holders are discounted to $20.

Hundreds of candles — 300 to be exact — will cast a flickering glow inside the historic theater’s auditorium as the symphony presents an all-Mozart performance.

“When you come to something like this, you’re up close and personal,” said Troy Douglas, president of the BLT board of directors. “Not only do you get to see the musicians, but you get to feel the music in the auditorium of The Haven.”

The Brookhaven performance of “Mozart by Candlelight” is one of three in the series for the symphony. They’ll also perform at Belhaven University Center for the Arts and at Holy Trinity Episcopal Church in Vicksburg.

Douglas requested the orchestra add Brookhaven to its tour of Belhaven and Vicksburg three years ago. After the performance, the orchestra asked if they could come back the following January. Now it’s becoming a regular stop in the series. The 40-45 musicians in the chamber orchestra enjoy playing at The Haven because of the acoustics and the setup at the theater plus the support of the community, he said.

The Haven allows seating for about 300 people.

“It’s the smaller venue. We’ve had people come from Vicksburg and Jackson who come to Brookhaven because it’s a more intimate venue,” he said.

Events of this caliber are becoming a more frequent offering in Brookhaven, which allows people to stay close to home rather than traveling to larger cities for entertainment.

“By supporting these events, it makes it possible to bring these acts back in the future,” he said.

The show opens with the master’s “Overture from Apollo et Hyacinth, K. 38,” followed by the “Divertimento in F Major, K. 138.”

Refreshments and alcoholic beverages will be served before the start of the show and during intermission. Attendees are encouraged to dress in semi-formal attire.

They walked the steel corridors, peered into the locked and caged holding cells. They visited the operations room and saw... read more