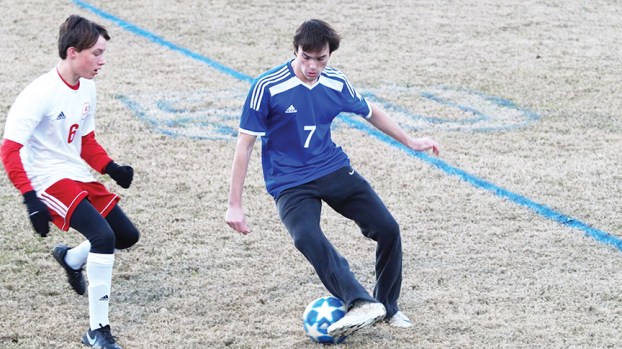 The last time the Central Private Rebels faced the Brookhaven Academy Cougars on the soccer pitch, BA brought home a 4-1 defeat. The Cougars (3-4, 1-2) avenged that loss Thursday as they won in overtime over Central Private by a final score of 4-3 on their home field.

Two halves weren’t enough time for either team to walk away with the win. The Rebels and the Cougars would finish regulation tied 3-3, forcing overtime. Brookhaven Academy would score the only goal in overtime to secure the win.

“We played as a team and were able to pick up the win,” Cougars senior Keegan Smith said.

Although the game started off as a defensive battle, the Cougars eventually broke free from the Rebels’ defenders, picking up the game’s first score as Logan Alexander was able to find Smith for a goal.

Although the Rebels had several scoring chances, Brookhaven Academy was able to clear the ball out.

After a long defensive battle, the Cougars would score their second goal as Carson Rounsaville was able to break past the Rebels’ defenders.

The second half opened with neither team able to score on their runs, but Central Private eventually weaved past the Cougars’ defenders for their first goal of the game and soon tied up the score with a second goal.

The Rebels would take the lead soon after, making Brookhaven Academy play from behind for the first time in the game.

Trailing 3-2, the Cougars would tie up the game as Harpreet “Sonny” Singh passed the ball to a wide-open Smith for the equalizer.

Neither team was able to score another goal before regulation ran out, setting up overtime.

Brookhaven Academy would eventually break past Central Private’s defense as Singh picked up his second assist of the game with a pass to Smith for the winning goal that helped secure BA their first district win of the season.

“I’m extremely proud of the way the boys played,” Cougars coach Clint Rounsaville said. “We were missing two of our starters and we had players step up. Our seniors truly led the way. We played with heart and as a team tonight. You always want to win in regulation, but we’ll take an overtime win too.”

Smith led the Cougars with a hat-trick of three goals and one assist. Rounsaville had one goal, Singh had two assists and Alexander had one assist for the Cougars.

Brookhaven Academy will be on the road Monday as they face off against the Adams County Christian Rebels. The Cougars next home match is Jan. 28 versus Laurel Christian.

The Copiah-Lincoln Community College Wolves could not get the momentum on their side Thursday night as the team fell to... read more