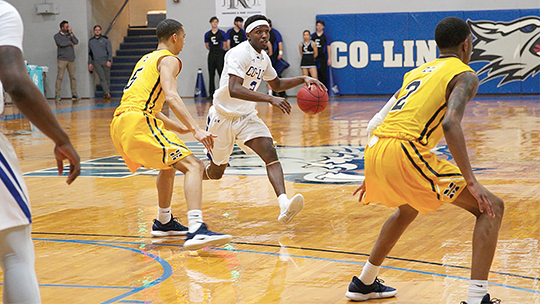 Photo by Co-Lin Sports Information Co-Lin sophomore guard Lazorian McNulty (Brookhaven High) dribbles towards the Gulf Coast defense on Thursday night in Wesson. The Wolves are back at home on Jan. 17 when they host Southwest Mississippi Community College.

The Copiah-Lincoln Community College Wolves could not get the momentum on their side Thursday night as the team fell to the Mississippi Gulf Coast Community College Bulldogs 75-59. The loss moves Co-Lin to 7-4 overall on the year and to 0-2 in MACJC play. Gulf Coast improved to 10-1 and 2-0.

Co-Lin is on the road Monday as the team takes on East Central Community College in Decatur. Fans can listen to the action live at WMJU 104.3 in Brookhaven or on colinathletics.com.

“We had no rhythm all night…none on offense or defense,” said Co-Lin head coach Kenny Bizot. “We didn’t have the patience, determination, and grit to break them down. Our poor offense led to poor defense and it was just a bad night all around…we have to be a lot more disciplined on Monday, it’s going to be a tough game.”

The Bulldogs came out firing as they leapt to an 11 point, 18-7, lead in the first seven minutes of play capped off by an 8-0 run. Darius Kent got the Wolves back in the contest a few minutes later with back-to-back threes, which cut the lead to just three at the time, but Gulf Coast grew the lead back to double-digits over the final 10 minutes of the first half.

The second half was much of the same for Co-Lin as the three-point shots failed to hit. On the other end of the floor, Gulf Coast capitalized on their sized and controlled the tempo of the game by getting under the basket.

Cameron Woodall led the Wolves with 10 points, Co-Lin’s only double-digit scorer. The freshman also led the team with six rebounds, five of which came on the offensive end of the court. Malik Wright, Damarius Brooks, and Miles Daniels all scored seven points, while Darius Kent came off the bench to net eight.

The Lady Wolves moved to 1-1 in division play with a 52-43 defensive win over the Mississippi Gulf Coast Community... read more