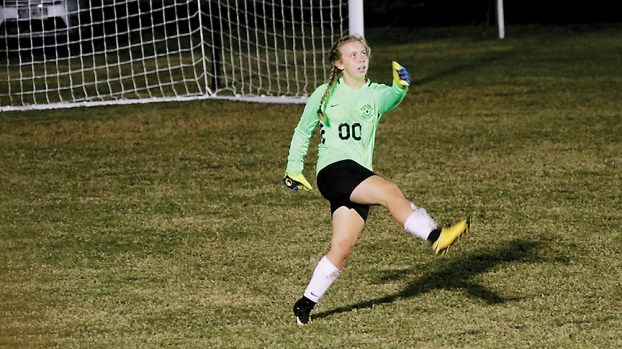 Brookhaven High finished up the first leg of division play soccer on Friday when they hosted the Forest Hill Patriots on King Field. In the girls’ match the Lady Panthers (5-7-1, 3-0) remained perfect in Region 6-5A play with a 7-0 trouncing of the Lady Patriots. In the boys’ match the Panthers (5-7-1) saw their bid for a fourth straight division title take a hit when they dropped a 2-0 decision to the Patriots.

The Lady Panthers played an aggressive game as their strikers quickly took control of the match as they held Forest Hill scoreless in the first half.

The Lady Panthers finished off Forest Hill early in the second half. Goal keeper Maddie Brabham made sure the shut out stayed intact all night as she was a brick wall for the Lady Panthers, stopping every shot the Lady Patriots attempted.

The Lady Panthers wasted no time on scoring as Miller got her first goal of the night in the first five minutes of action.

Up 2-0, it didn’t take long for the Lady Panthers to score again as Layla Woodall would pick up an assist by connecting with Miller for her second goal of the evening.

Miller would score her third goal of the game as senior Zoe Conner was able to pass her the ball for a goal.

The Lady Patriots had several scoring chances but were unable to get the ball past the Lady Panthers defense and goalie Brabham.

Lady Panthers sophomore Morgan Moak would give her team a 5-0 lead with her goal just before the half.

Coming out of halftime, the Lady Panthers continued their domination.

Woodall would score the first goal of the half as she kicked the ball past the Lady Patriots defenders and goalie from just past midfield.

Senior Jackie Madison would finish the scoring for the Lady Panthers to make it 7-0.

“The girls were a lot better on their passing and communication,” Lady Panthers coach Kevin Bower said. “We’ve been working on 1-2 touch passing, shooting drills and staying in position in practice.”

The young Panthers team played their hearts out but were unable to sustain enough offense to pick up a win.

“We played a hard-fought game,” Panthers coach Arron Ayers said. “We had a couple of miscues that Forest Hill was able to capitalize on. We’re a really young team this year and went up against a senior-led team, but we played our hearts out and we’ll see them again later this season.”

Forest Hill had several scoring opportunities early in the game, but the Panthers were able to create just enough defense to prevent the Patriots from scoring.

For most of the first half, Panthers seventh grader goalie Bryce Smith was able to keep Forest Hill from scoring.

The Patriots would eventually score off a corner kick.

Halfway through the first, Brookhaven was able to break past Forest Hill’s defense, only for the Patriots to clear out the ball to prevent the Panthers from scoring.

Both teams had several scoring chances throughout the second half but were unable to convert the chances into goals.

Both teams would settle into a defensive battle for the remaining of the half.

With time running down, Forest Hill was able to get past the Brookhaven defenders for the game’s final goal.

Brookhaven will continue region play tonight as they travel to Natchez to take on the Bulldogs. The Panthers host their final regular season home match of the season on Thursday when they welcome Wingfield to King Field.