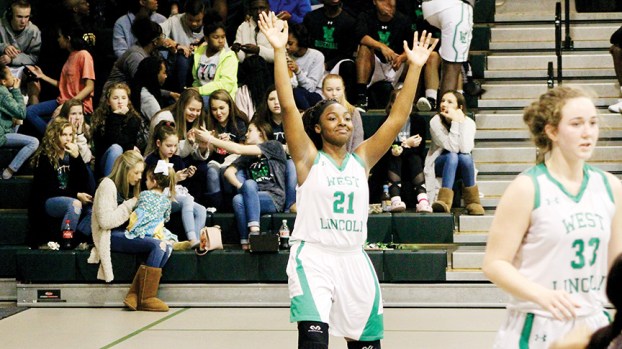 Photo by Cliff Furr West Lincoln sophomore forward Brittany Sturkey calls for the ball against Amite County on Friday night. Sturkey scored 11 points in a 67-15 Lady Bear victory and is averaging 10 points and four rebounds per game off the bench for WL.

The clock rarely stopped in the second half as mercy was shown to the Amite County Lady Trojans by the officials and their opponents. West Lincoln had jumped to a 39-2 first half lead on their way to a 67-15 region opening win on Friday night in Jack Case Gymnasium.

The Lady Bears (14-3, 1-0) are defending Region 7-2A champs and have won seven games in a row. Their remaining eight games are all against teams they’ve beaten once already this season. The average margin of victory in those wins? 39 points.

Complacency is the opponent that West Lincoln coach Brooks Smith is most focused on defeating. Last season the Lady Bears lost a home game to Loyd Star after starting 6-0 in region play. Smith wants his team to remember they won’t win games just by showing up.

“It’s a message they hear from me every day,” said Smith. “Losing to Loyd Star last season woke us up and I’d like for us to not go through that again. The goal is to finish first in the region to set ourselves up for the postseason.”

West Lincoln got a game high 17 points from senior forward Katelyn Dickerson. Dickerson has been on a hot streak of late as she has scored 12, 19, and 16 points in the last three games preceding Friday night. The 5-foot-10 Dickerson does a good job of operating around the basket and making herself available on cuts and flashes across the lane. She also grabbed six rebounds against Amite County including four offensive boards.

“Katelyn has really stepped up the last couple games and has played well for us,” said Smith.

Another player who has been strong for West Lincoln of late is sophomore Brittany Sturkey. Sturkey scored 11 points off the bench on Friday and like Dickerson, does a great job of being around the basket for the WL offense. Sturkey would start for every other team in the region, but for the Lady Bears the sophomore comes off the bench to give her team a jolt.

“She’s energy,” said Smith. “If we’re up, she bumps us up another notch and if we’re down she gets us up.”

Hall and Gerald led the team in scoring last season as juniors. With Wilson, Sturkey, and Dickerson all carrying their share of the scoring load of late, the Lady Bears are improving as they move into region play.

The home crowd also got one last look at the future of Lady Bear basketball at halftime when the 11-0 junior high girls’ team was honored. Members of that group will meld with the underclassmen from this year’s team to shape the future of West Lincoln hoops.

When Smith took the mic to address the crowd he was speaking about the junior high group but could have just as easily been talking about his varsity team when he said, “I told this group if they stay together and keep working they’ve got great things ahead of them.”

West Lincoln travels to Enterprise tonight for a 6 p.m. tipoff.

It started with one Keshon Byrd slam and it ended with another one; in between those plays the West Lincoln... read more