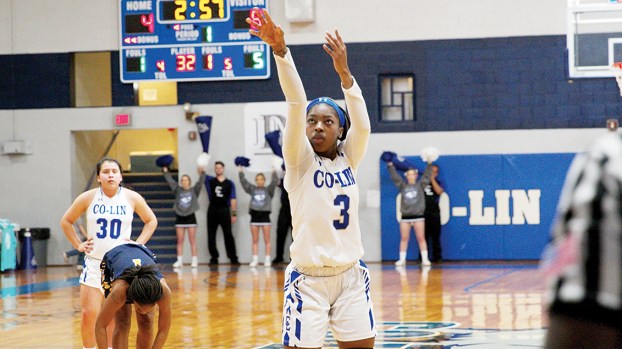 With just 1:12 remaining in the game, East Central knotted the game at 69-69 for the fourth tie of the matchup. Freshman Darien Tubby made a big layup on the other end on the following possession to help the Lady Wolves escape Brackeen-Wood Gymnasium with a 72-69 win to move to 11-1, 2-1 on the year.

The loss drops East Central to 10-2, 1-2. Co-Lin is back in Mullen Thursday as the team hosts Southwest Mississippi Community College. The game is slated for a 5:30 tipoff and fans are asked to wear blue for a “blue out” game. Fans can also watch the game live at colinathletics.com or listen live at WMJU 104.3 FM in Brookhaven.

“We took some quick shots late, missed them, and they went down and scored on them…and we threw the ball away, it was like a seven-point turnaround late,” said Co-Lin head coach Gwyn Young. “When we get ahead we need to learn to work the ball, we were fortunate to hang in there at the end because they had the momentum and were killing us on the boards. If you can pick up a win on the road is very helpful for us, it’s a good win for sure.”

The first quarter was hard fought as East Central grabbed a six-point lead midway through the period. Co-Lin responded with a 6-0 run to tie the game at 10-10, the second tie of the contest. The Lady Warriors closed out the first quarter with a 6-0 of their own to take a 17-13 lead going into the second.

Co-Lin kept the momentum in the third as the Lady Wolves quickly poured in seven unanswered points in the first four minutes. East Central finally started scoring midway through the quarter, but the Lady Wolves had grown the lead to a game-high 16, 47-31, with 4:21 remaining. Going into the final 10 minutes of play the Lady Wolves were up 56-41.

East Central began fighting back into the contest in the fourth. A 6-0 in with three minutes to go cut the Lady Wolves to just four, 68-64, the closest since the second quarter. Co-Lin hit a free throw, but a three-pointer from ECCC’s Jariyah Covington with 1:32 left brought the Lady Wolves’ lead to just two, 69-67. Covington followed with a pair of free throws with 1:12 remaining to tie the game, but Tubby’s late-game layup and excellent defense from the Lady Wolves in the final minute secured a Co-Lin victory.

Sha’Quandra Carter led The Lady Wolves with a stellar game. The freshman led the team in points with 19 and had a double-double, the first of her career, with 10 rebounds. Camryn Davis added 12 points, while TaMara Riley and T’Kyra Hicks scored 11 each. Ciara Norwood came off the bench to lead the team in assists with six.

Jariyah Covington led ECCC with 20 points after shooting 3-of-3 from three-point range, while Sharan Turner came off the bench and added 14.

Here is a look at how area teams faired this weekend during high school hoops action. Brookhaven High The Brookhaven... read more