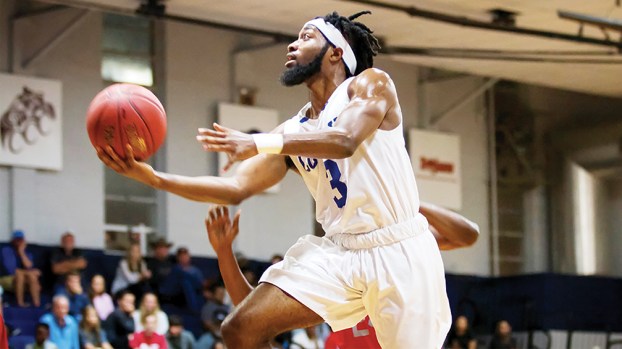 The Wolves of Copiah-Lincoln Community College trailed by as much as 12, 16-4, in the opening minutes of play on Monday before scraping out a big 78-74 win over East Central Community College.

The tough MACJC road victory moved the Wolves to 8-4, 1-2 on the year and dropped the Warriors to 7-5, 0-3. Co-Lin is back in Mullen Thursday as the team hosts Southwest Mississippi Community College. The game is slated for a 7:30 tipoff and fans are asked to wear blue for a “blue out” game.

“Huge win…huge win,” said Co-Lin head coach Kenny Bizot. “I’m really proud of our guys, especially after a bad week last week as far as energy, effort, and performance…and tonight we had guys step up. We used up just about everybody because of our foul trouble, but we just came together and got the hustle stats tonight in rebounds and steals, which is something I’ve been telling them about in the last few days.”

The opening minutes were all East Central as the Warriors jumped in front 16-4. The Wolves took that lead head on and answered with a 15-2 run led by Kenna Bryant.

During the run, Co-Lin capitalized on several trips to the free throw line, something both teams got plenty of chances at as the teams combined for 55 fouls. After the explosive run, Co-Lin led by one, 19-18, with 9:07 remaining in the first half.

The teams traded baskets for the next three minutes before Miles Daniels hit a big three with 2:05 remaining to stretch the Wolves lead to five, 37-32. Co-Lin took that five-point lead into the half.

The second half saw a lot of scoring as the teams continue to get trips to the free throw line. Over the opening 10 minutes of the second half, the Wolves grew their lead to 10, 55-45, the largest of the game for the Wolves.

The Warriors began to chip away at that lead throughout the second half as ECCC’s Roti Ware began hitting shots. With 3:31 remaining in the game Co-Lin’s lead had dwindled to just two, 67-65, and the Warriors had the momentum.

Co-Lin’s Damarius Brooks took the air out of Brackeen-Wood Gymnasium with 2:31 left on the clock with a big three-pointer. The shot stretched Co-Lin’s lead back to five. The Warriors continued to battle and cut the lead back down to just one, 70-69, but a big layup from Cameron Woodall and four straight free throws from Brooks kept the Wolves alive. Woodall closed out the game in the final 10 seconds with a huge dunk to secure the 78-74 win.

Damarius Brooks came off the bench to lead Co-Lin with 23 points after going 10-of-12 from the free throw stripe. Woodall finished with 18 points and led the team with nine rebounds. Miles Daniels also came off the bench and scored 12, while Kenna Bryant posted 11.

Nick Preyer led the Warriors with 17 points, while Roti Ware finished with 14. Dontavious Smith posted a double-double for the Warriors as he scored 11 points and hauled in 11 boards.

The MAIS recently released its 2018 AA All-State football team and four members of the 9-3 Brookhaven Academy Cougars were... read more