BPD on safety quest for students 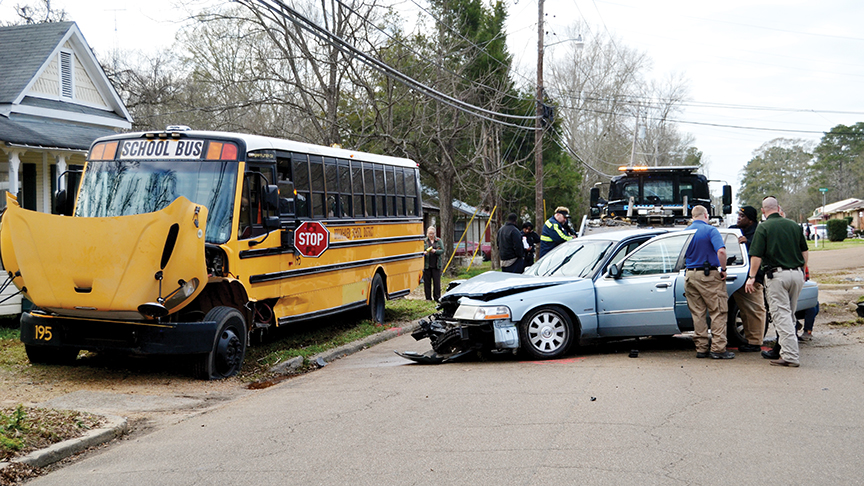 Photo by Donna Campbell A 15-year-old boy is facing multiple charges after he crashed into a Brookhaven School District bus Wednesday afternoon as it was dropping off students after school. Two 18-year-old occupants, Juansiamaure Jones and Arredeus Newson, will also likely be charged. Jones, Newson and the 15-year-old fled the scene, but were apprehended in the area after people in the community helped police discover their whereabouts, said Brookhaven Police Chief Kenneth Collins. The teenager, who has been sent to the Adams County Juvenile Detention Center, was attempting to pass the school bus in a 2013 Mercury Grand Marquis LS at a high rate of speed, Collins said. It struck the bus, which was headed east on Union street near Ingram Street. Twenty-eight students were on the bus when it was hit. Brookhaven School Superintendent Ray Carlock said EMTs checked the children following the crash and he was not aware if any of them were taken to King’s Daughters Medical Center for treatment, however, family members told The Daily Leader that several were injured and at KDMC Wednesday. Jones and Newson were taken to KDMC by ambulance. Their conditions are not available.

The Brookhaven Police Department is requesting the public’s assistance to ensure the safety of parents, children and school staff at Brookhaven Public Schools.

This action is likely prompted by a crash involving a school bus Wednesday that sent nine students to King’s Daughters Medical Center for their injuries as well as a few altercations that occurred in recent months near the schools.

A 15-year-old boy faces multiple charges after he crashed into a Brookhaven School District bus Wednesday afternoon as it was dropping off students after school. Two 18-year-old occupants, Juansiamaure Jones and Arredeus Newson, were taken to KDMC for their injuries. It’s unclear if charges will be filed against them.

The youth was sent to the Adams County Juvenile Detention Center Wednesday. A law enforcement officer witnessed him attempting to pass the school bus in a 2013 Mercury Grand Marquis LS at a high rate of speed, said Brookhaven Police Chief Kenneth Collins. The car struck the bus, which was headed east in the 800 block of Union street near Ingram Street. Twenty-eight students were on the bus when it was hit.

Jones, Newson and the 15-year-old fled the scene, but were apprehended in the area soon after.

“I’d like to thank the community over there for their assistance in helping us apprehend the three suspects,” Collins said. “All three of them jumped out of the vehicle and fled. The people in the community got out and pointed to us and helped us. I really want to thank them because we couldn’t have done that without everybody in that area getting out and helping us. I really appreciate it.”

Following the crash, students were taken to Lipsey Middle School to be seen by EMTs, said Brookhaven Superintendent Ray Carlock. A spokesperson for KDMC said nine students were brought to the hospital by their parents, evaluated and released.

Collins is asking motorists to use caution around the schools in the morning between 7 and 8 a.m. in the afternoon from 2:30 to 3:30 p.m.

“After recent altercations near the schools, we ask that the motorists comply with both school staff which may be directing traffic, as well as Brookhaven police officers,” he said.

The police department assigns officers to direct traffic, but sometimes emergency calls for service may pull the officer away from their assigned schools, he said.

“Verbal altercations with school staff, and police officers directing traffic will not be tolerated,” he said.

BPD also asks that traffic near Mamie Martin Elementary’ss parent drop-off and pickup enter the school from designated areas. Parents dropping off preschool students need to approach the school on Jennifer Street. Parents dropping off any other school children travelling on Jennifer Street will be turned around to enter at their correct locations.

Kindergarten students will remain approaching on Ingram Street from Union Street. After drop-off or pickup, traffic will exit onto Jennifer Street.

Those with first-graders or second-graders should approach on Ingram Street from the north, and enter campus by the softball field.

“From this date forward, the police department will not tolerate anyone getting into a verbal altercation with our officers or school staff when we are directing traffic,” Collins said. “Failure to comply with the officers directing traffic could result in a traffic citation, up to your arrest for failure to comply with the lawful order of a law enforcement officer.”