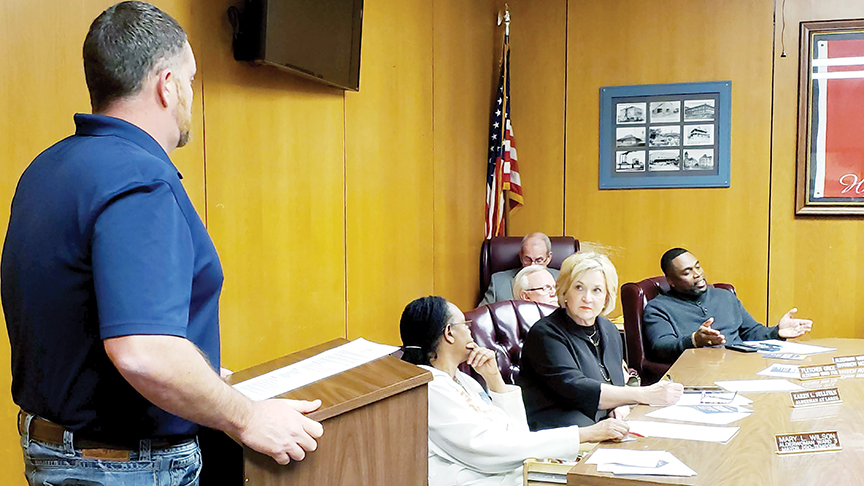 The man in charge of garbage operations for the city and county met with Brookhaven aldermen this week for a pep talk that turned into a query over missed routes and broken cans.

Chris Martin, the regional operations manager of Arrow Disposal Service Inc. whose office is in Birmingham, Alabama, appeared before the Brookhaven Board of Aldermen Tuesday to give an update on ADSI as the garbage collection company gets close to its fifth month in the city. The Alabama-based company also began a contract Oct. 1 with Lincoln County.

Martin said in the first four months they’ve had a few truck problems including a motor in a truck that had just 400 miles on it that had to be replaced. They’ve also replaced seven people since Oct. 1.

“All the bugs seem to be worked out,” he said. “Our facilities are updated; our trucks are ready; our drivers are getting trained. Our staffing issues haven’t been bad at all.”

Sometimes customers don’t get their garbage or recycling out on time and they get missed, he said.

“Our job is to recover that as fast as possible so if something like that is not happening then I need to know about it so I can fix it,” he said.

Ward 2 Alderman Shannon Moore said too many residents in his neighborhood are getting missed on Wednesdays, their scheduled pickup day. Many complain to him, but don’t feel they should be required to call a hotline to get their garbage collected when it’s just a once-a-week pickup.

“The problem I have with Arrow is if y’all are picking up once a week, and you skip a week, and don’t come pick it up, that’s twice as much garbage that’s going to be on the side of the road and down the street because you’ve got animals, stray dogs going through the garbage,” he said.

Martin said when he is in Brookhaven, he has gone out in a truck and picked up customers’ trash when he’s notified by the city through calls to their hotline, which is 601-835-8025.

Other drivers will do it when he’s not here.

“If I don’t know about it I can’t fix it up,” he said. “That’s the service we’re providing. That’s what we’re here for.”

Moore said his constituents don’t want to call the hotline to complain.

“We went from twice a week to once a week and y’all can’t handle once a week,” he said. “That’s the kind of complaints I get.”

Ward 1 Alderman Dorsey Cameron questioned Martin about customers getting a second cart to hold the trash that won’t fit in the one can supplied by the company.

“In a lot of cases that one can is just not enough to hold a one-week pickup,” he said.

Martin said customers can request additional carts through the hotline number as well, however, there is a monthly charge of several dollars that will be added to the customer’s bill.

Dorsey suggested customers purchase their own carts elsewhere to be used, but Martin vetoed that idea because Arrow doesn’t want to be held responsible for customer’s personal carts.

Alderwoman-at-Large Karen Sullivan asked Martin about the use of garbage bags to hold additional garbage that won’t fit in one cart. Martin said drivers will pick those up, but they’re easily ripped.

Martin said the company will periodically do audits to pinpoint locations of carts. Each cart has a serial number that is matched to an address.

Martin gave his cell phone number to all of the aldermen and said he would be available anytime aldermen need to talk to him either by phone or at a meeting.

Mayor Joe Cox said customers need to call the hotline immediately to report any missed routes so Arrow can pick it up that same day.

“If your garbage isn’t getting picked up, call somebody, call the hotline, we will get in touch with Chris. It will get picked up,” he said.

Arrow was awarded the three-year contract in July after a 4-3 vote. Cameron, Moore and Ward 3 Alderwoman Mary Wilson voted against the motion to hire ADSI.

ADSI’s contract is for $11.50 per household for once-a-week pickup. They also proposed $15 for twice a week. The city can renegotiate the contract to twice-a-week if it is needed. ADSI’s per-household costs are not the final costs that customers see, as other fees and expenses are added to garbage bills.