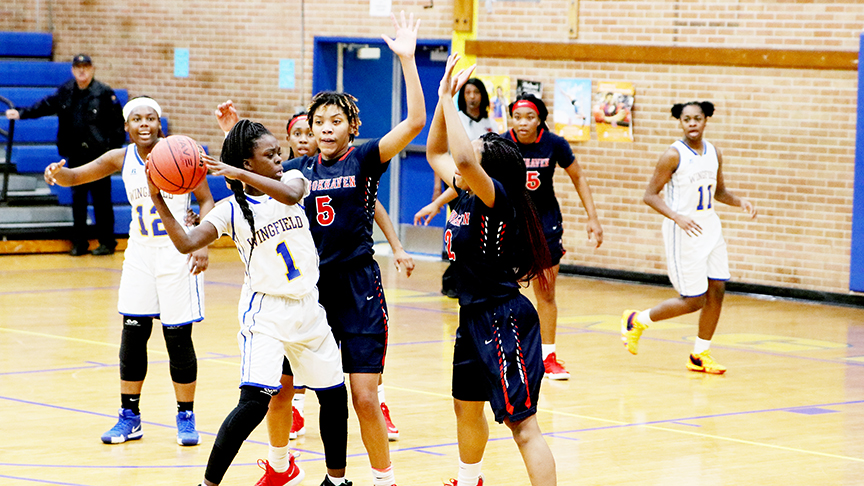 The Daily Leader takes a look at weekend basketball action.

The Brookhaven High Lady Panthers (19-1, 3-0) picked up their ninth straight victory on Friday night when they whipped the Wingfield Lady Falcons 82-61 in Jackson.

“We played very well offensively,” said Lady Panther head coach Preston Wilson. “We had a good energy level and Silentianna Collins had her best overall game of the season.”

Collins scored a season high 26 points as she went 9-for-15 from the floor and 4-for-5 from the 3-point line. Collins also grabbed seven rebounds and handed out five assists. Senior forward Tamia Stallings added 17 points and 12 rebounds for BHS.

BHS hosts a pair of huge region games this week. Tonight, the Forest Hill Patriots visit Sinclair Gymnasium. In their first meeting the Lady Panther beat FH 51-50 and the Patriots defeated the Panthers 90-48 in the boys’ game. On Friday the Panthers play host to Natchez High.

The Cougars stayed unbeaten in district play after sweeping a pair of games at Newton County Academy on Friday.

The Wesson Cobras (17-5, 2-3) picked up their second straight Region 8-3A win on Friday with a 68-34 win over West Marion in Foxworth. In the girls’ game the Lady Trojans defeated the Lady Cobras (1-21, 0-5) 52-42. Wesson has a pair of region road games this week as they travel to Tylertown tonight and Seminary Friday.

Lawrence County traveled to Greene County on Friday and played in the Bay Springs Classic on Saturday at Bay Springs High School.

On the boys’ side the Cougars (9-11, 4-1) continued their strong Region 7-4A play with a 40-32 win against Greene County. The Cougars have won four straight region wins after losing a 37-35 to Greene County in their region opener on Jan. 4.  On Saturday the Cougars lost 54-36 to the 19-1 Bay Springs Bulldogs.

The Lady Cougars (13-7, 4-1) dropped their first region game of the season on Friday when Greene County defeated them 50-49 in Monticello. On Saturday the Lady Cougars bounced back with a 52-43 win over Bay Springs.