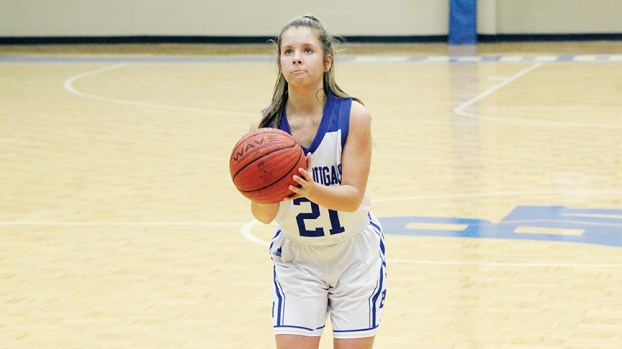 No Saint was spared on Tuesday night in John R. Gray Gymnasium as the Brookhaven Academy Cougars pounded Prentiss Christian in a pair of varsity games.

BA is back in district play tonight when they host the Clinton Christian Warriors before hosting East Rankin on Friday.

The Hornets swept a pair of games in Liberty on Tuesday as they took two wins over Amite County.

In the boys’ game the Hornets (13-7, 4-0) remained unbeaten in region play with a 66-61 win over AC. Loyd Star built a 39-26 halftime lead but had to hold off the Trojan comeback as the home team outscored them by seven points in the final frame.

The Lady Hornets (10-10, 2-2) had no problems with the Lady Trojans in the opener as Loyd Star took a convincing 60-22 win. Junior forward Taylor Smith went had her best game of the season in the win as she scored 20 points and grabbed 10 rebounds to pace the LS offensive attack. Sarah Britt added 13 points and Aubrey Britt scored 11 points for the Lady Hornets.

Loyd Star is back in Region 7-2A play on Friday when they host Bogue Chitto.

The Enterprise Yellow Jackets were swept at home Tuesday in a non-region matchup with the Pisgah Dragons. In the girls’ game the Lady Jackets (6-12) got a game high 11 points from eighth grader Hannah Jergins in a 53-36 loss. The boys’ game was a close one that saw Pisgah prevail 46-38 in overtime. Anthony Nations led the Yellow Jackets (4-14) with nine points.

Enterprise is back on the court Friday when they travel to Amite County in Liberty for a pair of region games.

The Wesson Cobras (17-6, 2-4) lost nothing short of a heartbreaker on Tuesday night at Tylertown. The homestanding Chiefs hit an overtime buzzer beater to give themselves a 60-57 win over Wesson. Tylertown beat Wesson by five — 52-47 — the first time the two teams met.

Wesson travels to Covington County on Friday for a Region 8-3A matchup with Seminary.

The Cougars host region foe Purvis for a pair of games Friday in Monticello.

Lady Wolves improve to 13-1 with win over Lady Bulldogs