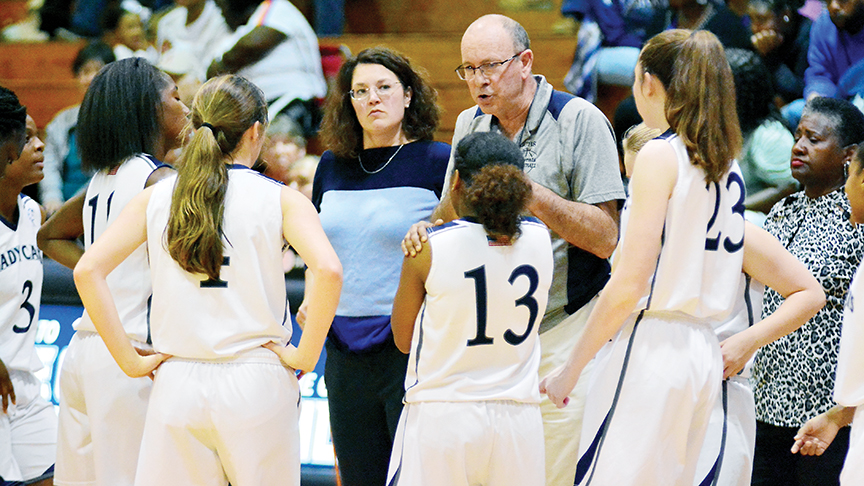 Dale Kimble is a Loyd Star graduate and long-time high school basketball coach. Kimble recently won his 600th career game with a victory over Lawrence County. The following story was published in “The Greene County Herald” after the milestone and is being reprinted here in part, with their permission.

Coach Dale Kimble’s storied career on the basketball court reached a new milestone recently. And, as if scripted by a Hollywood movie mogul, Kimble’s 600th career win could not have come at a better time or in more dramatic fashion.

Trailing 43-37 early in the final period, Kimble’s team went on a 13-2 run to claim control and then held off a late rally by Lawrence County in the battle of Region 7-4A’s top two teams. The emotional win by the Lady Wildcats marked the first setback in region play for Lawrence County and pushed GCHS into sole possession of first place with a half-game lead over the Lady Cougars and four regular-season region games left to play.

“We really stepped it up defensively in the final quarter to earn a big win,” Kimble said. “Our pressure created turnovers and we were able to score points off those. Plus, we didn’t give them anything easy down the stretch.”

“I am very proud of the way these young ladies played.”

The win provided a little sweet revenge for the Lady Cats, who suffered one of their most disappointing losses of the year in a 24-point loss to the Lady Cougars the first time the two teams met back on Jan. 4. Kimble’s team struggled to get anything going offensively in that trip to Monticello, managing just five points in the first half. GCHS was bound and determined to get off to a better start at home and did so.

Defense worked its way back into the matchup in the final three periods. The visitors outscored GCHS 11-6 in the second period and held a 30-29 lead at the half. They built that lead to four in the third stanza and appeared poised to steal a huge win on the road until GCHS started dominating the glass on both ends of the court and started pushing the ball up the court to swing the momentum and get the crowd on their feet.

Senior McKay Lee Bray hit one of her three 3-pointers to close the gap to 43-42 with just over five minutes to play. … The defending state champs never quit fighting, but a couple of big rebounds by the home team helped maintain the edge. Lawrence County had a chance to tie it in the final seconds, but scored on a 2-point basket just before the buzzer to push the final score to 50-49 …

“Our bench has really been coming up big for us,” Kimble added. “We’ve been able to play a lot of girls and get them quality minutes throughout the season and that has started to pay off.”

Very few people knew about the pending milestone. Kimble had let it slip in a conversation with GCHS Principal Scott Bray and Greene County Herald Editor Russell Turner prior to the season getting underway, but there had been no real mention of it beyond that.

“I have known Dale a long time and I knew he had been very successful,” Turner said. “But, I had no idea he was close to 600 wins. That’s pretty special when you think about it. You have to be really good at what you do and do it for a long time to post those types of numbers.”

“One of the coolest things about Dale is that he has that rare combination of passion and humility. He is extremely driven, but there is nothing fake about him. He loves his students and players and has served as not only a coach and teacher to them, but also a counselor, father figure, friend, whatever the moment called for. For that matter, he had been the same for me and many others that call him friend.”

Success has followed Kimble throughout his long career, which included stints leading men’s and women’s programs at New Augusta, Perry Central, Brookhaven and Fruitdale prior to coming to GCHS. He has nearly 30 years in education in Perry and Greene counties alone.

The GCHS women’s program has enjoyed steady success under the direction of Kimble. In just the past three seasons, the Lady Cats have won 71 percent of their games (they were 80-33 during that time heading into Tuesday’s non-region matchup with Citronelle).

The GCHS baseball program has also benefitted tremendously with Kimble as a regular assistant coach. But, to hear Bray, who brought Kimble on as his pitching coordinator back in 2002 and has worked alongside him on the field and in the classroom since, Kimble’s contributions to the school and community are far greater than the hundreds of basketball and baseball wins he has notched as a Wildcat.

“Everyone at GCHS is so proud of Dale for reaching this historic milestone,” Bray said Tuesday. “It is an accomplishment that only a few coaches have ever experienced at the high school level. He has had an incredible career.”

“Everyone know he is a great coach, but I think he is even better as a math teacher. His love for educating young people has been his passion and the results are obvious. He has been and will continue to be a difference maker in the lives of our students. We are so blessed that he is a Wildcat.”

As for the man himself, singling out one or two top highlights from a career that has spanned 42 years is a tough assignment. There are some obvious ones, like the night three years ago when one of his players who had lost a leg in a medical mishap got the opportunity to get into a game and score.

“Seeing the look on her face was special and something I won’t soon forget,” Kimble said. “Seeing any of my players, and I keep up with a bunch of them, be successful in life never gets old.

“I like to win. Wins are really nice. But, they just don’t compare to the other stuff. It is like I always tell our players, ‘it’s not the destination that matters, but the journey.”

Kimble’s journey has been a good one. From the day he stepped foot on the campus at Pass Christian in 1978 to start his career (assistant basketball and football coach and head baseball coach), all the way to the ovation he got while standing on the GCHS court Tuesday night after his team defeated Citronelle, Kimble says he has been blessed.

“It has been great and I really want to thank Coach Bray and the school board for giving me the opportunity to come back here and coach,” he added.