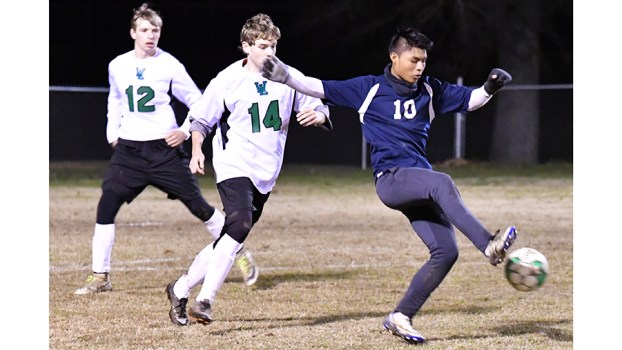 Photo by Stacy Leake Yosvin Hernandez of Bogue Chitto controls the ball against the defense of West Lincoln players Sawyer Lewis (No. 12) and Trevor Murray (No. 14). West Lincoln won the boys’ match 4-1 Thursday night in the final games of the season for both teams. Hernandez scored the lone BC goal and WL got scores from Nathan Gary, Noah Addison, Jacob Thornton, and Jacob Lofton. In the girls’ match the teams tied 1-1. Camryn Summerall scored for the Lady Bears and Tiffanie Thames found the net for the Lady Bobcats. This season marked the second for the BC program and third for West Lincoln soccer. 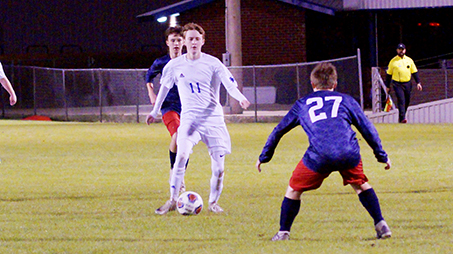 Senior night at Wesson saw the Cobras split a pair of division soccer games with region rivals Loyd Star. In the girls’ match the Lady Hornets and the Lady Cobras played a low scoring game as Loyd Star was able to hold on for the 1-0 win. The boys’ match saw Wesson able to outlast Loyd Star by a final score of 3-2.

In a highly contested defensive game, it would come down to who could muster up enough energy to get a goal past two great goalies.

“The season started off a little rough,” Lady Hornets junior midfielder Adriahna McDavid said. “Towards the end we became more of a team and scored the goals we needed in order to win games.”

The girls battled back and forth all first half with neither team able to get the ball past the opposing goalie.

Both teams’ goalies are only freshmen this year, Emma Britt of Loyd Star and Kyla Smith of Wesson, but both did an outstanding job at blocking contested shots. The match was scoreless at the halftime break

Each team had plenty of chances to score the game’s first goal in the second half, but saw the defenders step up and clear out the ball.

The balls the defenders couldn’t clear out, the goalies took care of.

With close to six minutes left to play — in a game that looked to be heading into overtime — the Lady Hornets managed to press the ball up field.

Working the ball up the left side of the field, Lady Hornets eight-grade forward Mary Clare McCurley was able to find McDavid for the game’s only goal.

“Our defense was very strong in a physical game,” said McDavid. “I wouldn’t say I was the only one to make the shot. It took a team effort, I was just the lucky one to get a foot on it.”

Speaking on the season, Lady Hornets coach Dale Brister reflected on a team that has won three matches in a row and secured a playoff berth with the win over Wesson.

The keys to the season for Brister was keeping his players motivated and involved.

“We lost eight seniors last year,” said Douglas. “We’re a young group and finished with a winning record (10-8). I’m looking forward to next year with the good group we have coming back.”

The Lady Hornets will travel to play Clarkdale in the opening round of the MHSAA 1A/2A/3A playoffs.

The boys game saw both teams battling it out throughout the first half, with Wesson holding onto a slight lead heading into halftime. Coming out of halftime, the game would see Loyd Star tie up the game and a late goal by Wesson to secure the win.

“We started the season off strong,” Wesson senior Jim Guess said. “We then kind of lost it halfway through but picked it back up going into region play.”

Both teams settled in for an early defensive fight as each team had several scoring chances but were unable to score.

Wesson would score the first goal of the game on a shot by senior forward Seth Cone. Guess would then help build the Cobra lead with a goal of his own.

“Loyd Star played hard,” said Guess. “We let up in the second half.”

Loyd Star prevented being shut out in the first half when Zach Nevels scored as the Wesson goalie was attempting to maintain control of a ball he had deflected a few second before.

Loyd Star would tie up the game in the second half as senior Cole Carpenter was able to break free from the Wesson defense to score.

“We had a good game,” said Brister. “The boys played a very good game. They worked together a lot better tonight. We just ran out of time.”

With the win Wesson secured second place in their region and move on to face Forest in the opening round of the playoffs.