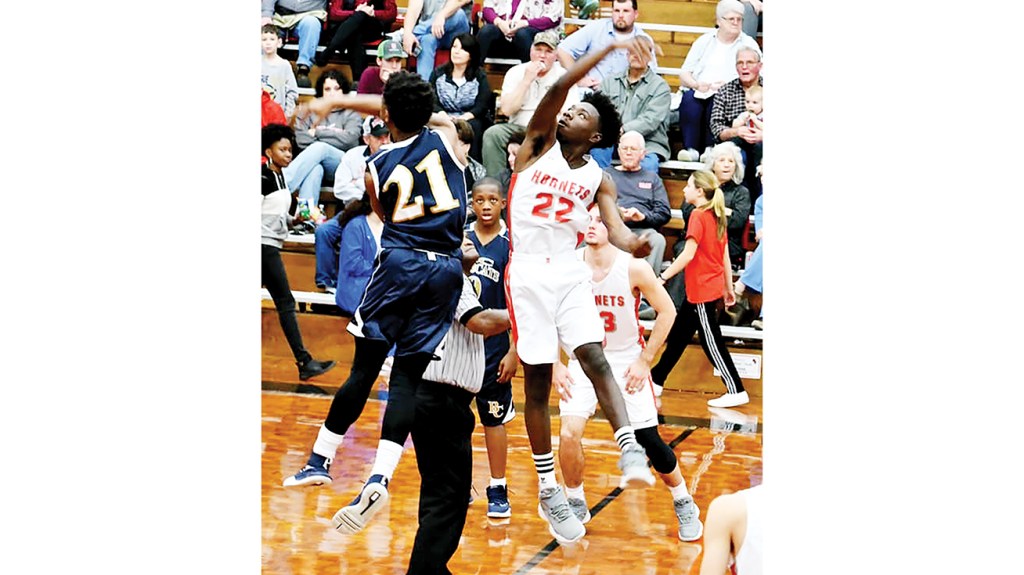 Photo by Stacy Leake Zach Upkins of Bogue Chitto and Zaycheous Vaughn of Loyd Star vie for the jump-ball on Friday night. Vaughn scored six points for the Hornets and Upkins put up eight for the Bobcats in a 66-41 Loyd Star victory.

Loyd Star relied on their defensive pressure and winning on the backboard to stay out in front of the Bobcats throughout the first half. The Hornets didn’t slack up in the second half as they never allowed Bogue Chitto to come close.

“It was a big win for us at home against a region opponent,” Loyd Star coach Seth Britt said. “Anytime we can get a region win, it’s important. Dane Smith had a good game tonight.”

With the game tied 7-7 with under four minutes left in the first Smith broke the tie for Loyd Star.

The Hornets would build on their lead as their defense kept the Bobcats under double digits at the end of the first, holding them just nine points.

Heading into the second quarter, Loyd Star was up 25-9.

“Defensively, I thought we played really well,” said Britt. “At times we were sloppy on offense though. Overall, I’m proud of the guys and that they fought throughout the game and were able to take the win.”

The Hornets opened the second half hitting an eight-point run before Cameron Gladdens of Bogue Chitto would end the run making 1-of-2 from the line.

In the third quarter the Hornets began to play above the rim as Smith stuffed home a slam on a missed Jett Calcote shot and then Zaycheous Vaughn flushed home another dunk off a Smith miss.