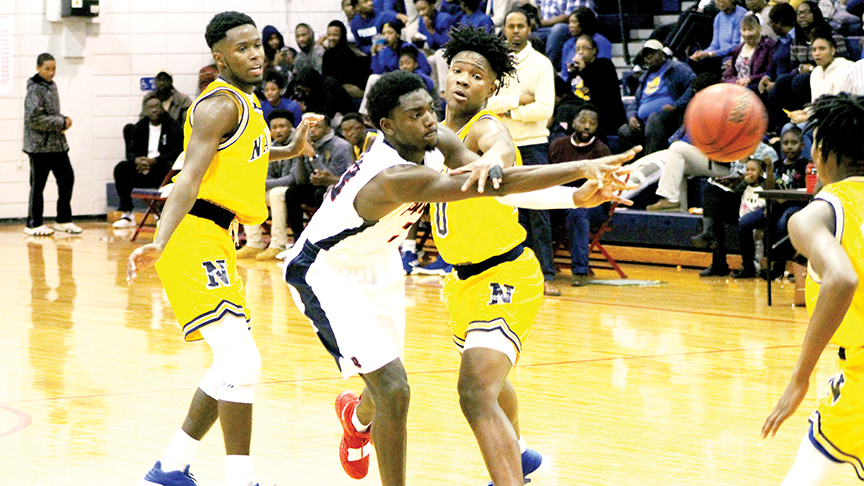 Photo by Cliff Furr Brookhaven High senior forward Lafollette Bogan fights through the defense of Kedarius Stampley of Natchez High. No foul was called on the play. Bogans scored 30 points to lead BHS and Stampley scored 24 for Natchez in a 69-63 overtime win by the Panthers.

The Brookhaven High Panthers swept a pair of victories from their Region 6-5A foe Natchez High on Friday night in Sinclair Gymnasium, but the two wins couldn’t have been any more different. In the girls’ game the division leading Lady Panthers (21-1, 5-0) nearly held the Lady Bulldogs to single digits in a 52-12 BHS win. The boys’ game needed extra time to decide the winner as the Panthers (17-5, 3-2) outlasted the Bulldogs 69-63 in overtime.

The Lady Panther led 19-0 after the first quarter and 31-5 at halftime. It’s not been unusual to see BHS win games by big margins this year. This was the ninth game in which they’ve held their opposition under 30 points this season. What was jarring was to see that against a Natchez team that was 5A state champions just four years ago.

Junior guard Silentianna Collins led the Lady Panthers with 17 points, all coming in the first half. Collins was the only BHS player in double figures as 11 different Lady Panthers scored in the game. Ayanna McNairy scored six points and Tamia Stallings added five points for BHS.

The Lady Panthers have locked up the top seed in the region tournament that takes place the second week of February. They have non-division homes games this week against North Pike today and South Jones on Friday.

The Brookhaven boys’ team was coming off of an emotional 72-61 win over Forest Hill earlier in the week. After that game BHS head coach Marcus Flippin had worried how his team would fight having a letdown against Natchez on Friday.

BHS won 72-51 when the two teams met in Adams County earlier in the season.

The teams looked evenly matched in the first half as they were tied 22-22 at halftime.

Natchez and head coach David Haywood were comfortable staying in their 2-3 zone and making the Panthers try to earn scores from deep. BHS struggled to do that as Natchez controlled the pace of play for much of the first three quarters.

In guards KeDarius Stampley and James Singleton the Bulldogs have a talented pair of juniors that carried them offensively. The long, athletic Singleton scored 12 points, but did not make a field goal after the first quarter. Stampley is a 6-foot-2 left-handed guard that isn’t easily knocked off the ball due to his strength. He scored 24 points to lead NHS and scored nine of those points in the third quarter when Natchez took the lead.

BHS trailed 44-42 after the third quarter.

With just over two minutes left in the game, Natchez was still holding a slim 53-52 lead after sophomore guard La’Darius “Duke” Thrasher scored on a layup for BHS. The Panthers would then take the lead when junior guard Jermario Hersey grabbed a defensive rebound and drove the length of the court to score a layup that put BHS up 54-53.

Natchez would regain the lead on a pair of Singleton free throws. Thrasher would try another runner that missed, but Hersey was fouled when he tried to dunk the missed shot.

Hersey went 1-of-2 from the line and with 30 seconds remaining the game was tied at 55. Natchez ran down the clock to get a final shot and the Panthers scrambled to pressure the ball at half court. Stampley beat the pressure to get one of his teammates a layup that would have won the game.

However, Brookhaven guard Axavian Jones came flying in from across the lane to block the shot high on the backboard and give BHS a chance to see overtime.

“I was just trying to save the game,” said a smiling Jones afterwards. “I knew I had to go up and get it. I surprised myself with how high I got up.”

An All-Region defensive back in football, Jones broke on the ball like a corner jumping a route for an interception.

On the overtime tip John Hilbert tapped the ball to Lafollete Bogan who laid it in as BHS would never trail in the extra period.

Bogan scored 30 points to lead the Panther offense. The senior forward did not score in the first quarter and struggled with his jumper much of the night but picked the BHS offense up in the second half with his drives to the basket.

“Coach told me to start taking the ball to the basket and that would open things up for my teammates,” said Bogan.

“Natchez has a very good team,” said Flippin. “Our guys really started to turn it on with about two minutes remaining in in the third quarter.”

BHS only has one region game remaining, at home on Feb. 5 against Wingfield. The Panthers will also be pulling for Natchez on Feb. 1 when they play at Wingfield as the Panthers and Falcons are currently battling for second place in Region 6-5A.