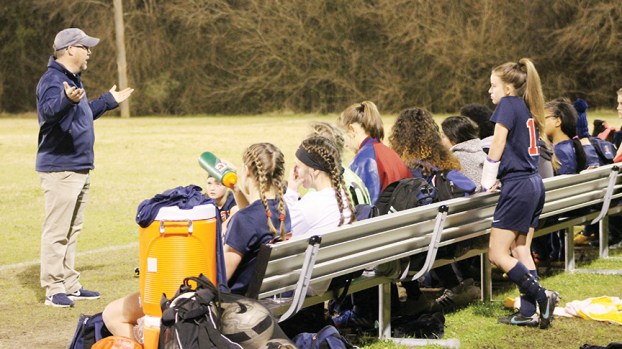 Photo by Cliff Furr Brookhaven High coach Kevin Bower speaks to his team following their loss to West Harrrison on Monday night. West Harrison turned a 1-0 halftime lead into a 6-0 win in the opening round of the MHSAA 5A state playoffs. 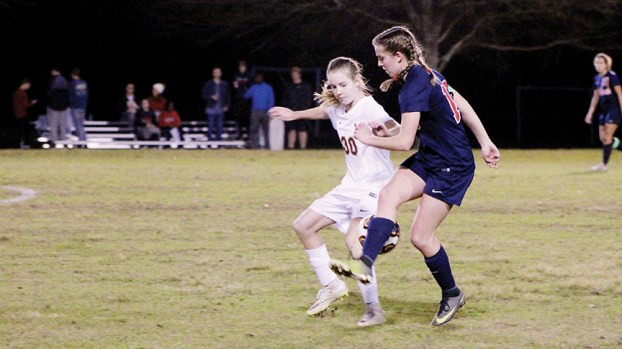 Photo by Cliff Furr BHS senior Kat Wallace battles for the ball with a West Harrison defender on Monday night at the Hansel King Sports Complex. The Lady Panthers finished the season with a 8-8-1 record.

The Brookhaven High Lady Panthers saw their soccer season come to an end on Monday night after suffering a MHSAA 5A first-round playoff loss 6-0 to the West Harrison Lady Hurricanes at the Hansel King Sports Complex.

The Lady Panthers (8-8-1) earned the right to host the match after winning Region 6-5A with a perfect 6-0 record. The Lady Hurricanes (7-10) finished second in Region 8-5A behind Long Beach. The Lady Canes are a traditionally strong program that finished 5A runners-up in 2016 and 2017.

In the first half the Lady Canes controlled a majority of the time of possession. A foul at midfield set up the first goal for WH. On the free kick the ball was blasted into the box where sophomore Marley Sims directed the bouncing ball past BHS goal keeper Maddie Brabham.

The West Harrison lead would stay 1-0 at the halftime break. Though Brookhaven had few offensive opportunities in the first half, the Lady Panthers and their coach Kevin Bower were encouraged by those tries. The WH keeper bobbled and dropped two balls that she should have caught and the hope for BHS was to put more pressure onto the Lady Cane defense in the second half.

That didn’t happen though as West Harrison added their second goal within the first 10 minutes of the second period. Angela-Joy Remoto would find Sims in the box after a corner kick for the second Lady Cane goal.

Five minutes later the WH offense struck again and it was another corner kick that set it up. Brabham stopped a high bouncing shot that deflected off her gloves and into the foot of Hannah Sexton.

Sexton would add another goal on a counter attack a few minutes later and then Sims got her third goal of the night later in the period on a run into the box. Gabriella Bridges capped the WH scoring late in the half off a goal via a deflection.

It was the final game for a BHS senior class that went 20-0 in region play over their four years on 443 East Monticello Street. Senior Kat Wallace has been playing varsity soccer since her seventh-grade season and has to be among the all-time scoring leaders in program history. BHS also loses seniors Jackie Madison, Zoe Conner, Victoria Sittig, Sidney Medina, La’Dericka May, Gracie Piper, Timara Porter, and Kamryn Nelson.

Bower had thought this season would be a rebuilding year with the team having many young players stepping into starting roles. He was pleasantly surprised when they crushed their region competition by a combined 47-2 margin.

“I’m proud of the year the girls have had,” said Bower. “Maddie has been great in the goal for us all season and we’ve had some younger players step up and improve from the start of the season. We’re going to miss these seniors and I really wanted to win tonight for them. West Harrison started turning up the pressure in the second half and we couldn’t respond. You can’t just get a ball through and go score against a team like this, you’ve got to work it down from the midfield and tonight we couldn’t do that.”