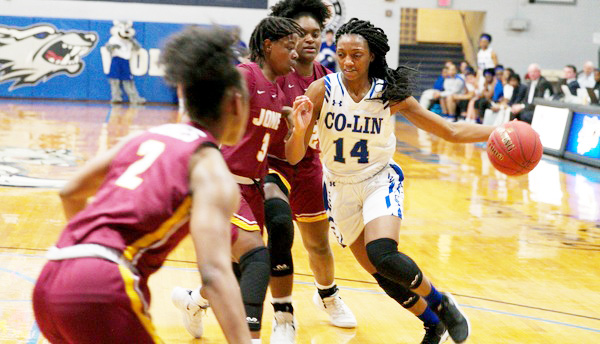 Photo by Co-Lin Sports Information Camryn Davis (Lawrence County) drives to the basket against the Jones College defense on Monday night. Davis, a freshman forward, scored 18 points as the Lady Bobcats held off Copiah-Lincoln for a 106-91 win.

The loss drops the Lady Wolves to 13-3 on the year and to 4-3 in MACJC South Division play. The Lady Bobcats improved to 15-1, 7-0. The Lady Wolves are back in Mullen Gymnasium on Thursday, as Co-Lin hosts Pearl River Community College. Co-Lin fell to the Lady Wildcats earlier in the year, 57-54. The game starts at 5:30 p.m.

“We made some good runs to get back in it, but it seemed like we were trying to keep up the whole game,” said Co-Lin head coach Gwyn Young. “We still have a lot of learning to do. We need to correct some mistakes that we keep making over and over. We are going to have to be fighting for our lives the rest of the games.”

The Lady Wolves struggled shooting the ball early on as the Lady Bobcats took an eight-point, 13-5, lead midway through the first. Jones’ three-pointers were Co-Lin’s downfall in the opening quarter as the Lady Bobcats hit 3-of-4 long balls. Co-Lin began scoring late in the quarter, but Jones took a 24-15 lead into the second.

Jones kept the momentum rolling in the second quarter with two quick baskets to start the period. Co-Lin responded with an 8-2 run, with the help of a pair of free throws on a technical to cut the lead to just seven, 30-23, the lowest since 2:31 left in the first.

The offensive swing was short lived as the Lady Bobcats quickly pulled back ahead with double-digits with an 11-2 run. The run put stretched the Lady Bobcat’s lead to 16, 41-25. The lead grew to 20 later in the quarter, but Co-Lin battled back to cut it 16, 52-36, going into the locker room.

The Lady Wolves cut the lead down to 10 early as Camryn Davis made three quick layups. Jones bounced back and stretched their lead to 22, 77-55, late in the quarter. Co-Lin got some momentum late in the quarter as Azaria Magee hit an and-one in the final seconds, but the Lady Bobcats quickly rushed down the court to hit a buzzer beater. The shot put Jones up 79-58 going into the fourth.

Magee kept that ferocity up to start the fourth as she hit back-to-back three-pointers. Co-Lin’s offense continued to roll throughout the quarter as the team cut Jones’ lead to nine, 86-77. The Lady Wolves scored 33 points in the fourth, but the effort came up short as Jones continued to find the basket.

Keyara Jones led the Lady Bobcats with 23 points after shooting 6-of-10 from the floor. Destin Haymer added 19 points while Breonca Ducksworth scored  18. Kyia Weathersby led Jones in rebounds with 10 and recorded a double-double after netting 13 points.