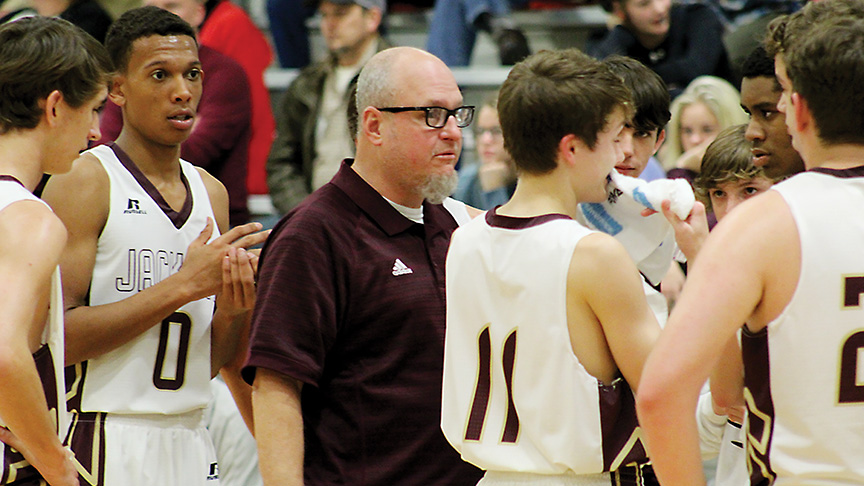 Photo by Katie Furr Coach Shane Adams and the Enterprise Yellow Jackets are back in action on Friday when they travel to West Lincoln for a region matchup. Enterprise has their regular season finale at home on Tuesday.

The Loyd Star Hornets swept a pair of Region 7-2A games from the Enterprise Yellow Jackets on Monday night at home.

In the boys’ game the Hornets stayed perfect in the new year as they won seventh straight game since the Christmas break with a 57-37 victory over the Jackets.

In the girls’ game the Lady Hornets and Lady Jackets started slow as LS only led 5-0 after the first quarter before running out to a 50-27 win over the Lady Jackets.

Tonight, Loyd Star travels to Eatonville north of Hattiesburg to face the North Forrest Eagles. Members of Region 8-2A, the North Forrest girls are 16-6 and 7-0 in their division. North Forrest has an 11-game winning streak with their last loss coming on Dec. 14 against 4A Northeast Jones. North Forrest is also formidable on the boys’ side as they have a 17-3 record.

The Hornets will have the rare back-to-back night of games with a matchup against Salem on Friday at Loyd Star. They’ll finish region play next week with a pair of home games against West Lincoln and Amite County.

Enterprise travels to West Lincoln on Friday before wrapping the regular season up next week. On Monday the Yellow Jackets host Bogue Chitto in the final regular season game of the season for Enterprise.

The Region 7-2A tournament will begin on Feb. 11 at Amite County. The region standings have Loyd Star at the top of the division on the boys’ side and West Lincoln on top of the girls’ group.