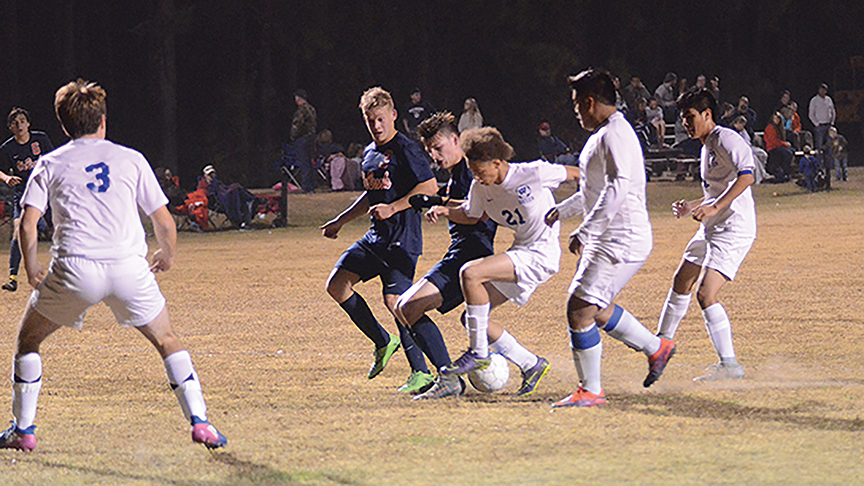 Daily Leader file photo The Wesson Cobras will face the Forest Bearcats tonight in the opening round of the 1A/2A/3A boy’s state soccer playoffs.

Here is a look at how area teams have fared in the first round of the MHSAA soccer playoffs.

The Wesson Cobras travel to Forest tonight to take on the Bearcats in the opening round of the 1A/2A/3A boys’ state playoffs. The Cobras come in to the match with a 10-8 record and are coached by John “Bobo” Douglas. Wesson and Forest have a common opponent in Magee High School. Magee defeated Wesson 3-1 on Jan. 10 at home. On Dec. 1 Forest (9-8-1) hosted Magee and lost 2-1.

Last season Wesson won their opening round playoff game against Magee before being eliminated by the eventual state champions — Sacred Heart.

The winner of the Wesson-Forest match will move on to play the winner of St. Patrick versus Magee.

The Loyd Star Lady Hornets (8-9-1) saw their season end Monday with a 6-1 opening round playoff loss at Clarkdale.

It was the first playoff appearance since 2015-2016 for coach Dale Brister and his squad as LS edged out Wesson for second place in the region behind Franklin County (23-1-1).

Franklin County moved on to the second round to face St. Patrick (12-6-1) after beating Forest 1-0 in the first round Monday.

The Lady Hornets lose Hannah Michele, Kyleigh Carpenter, and Katelyn Smith to graduation, but return a large rising senior class including Anna Ferguson, Morgyn Brister, Tabby Wyant, Adriahna McDavid, Megan Garcia and Karmyn Barlow that has made up a big part of the starting lineup since they arrived on the high school level.

The best soccer season in school history ended Monday with a 5-0 loss at Poplarville for the Lawrence County Cougars (10-8).

LC and coach Justin Daley were making a second consecutive playoff appearance for the first time in program history. The Cougar qualified for the postseason after finishing as runner-up in Region 6-4A behind Sumrall (14-8). Sumrall was eliminated Monday when East Central beat them in a shootout.