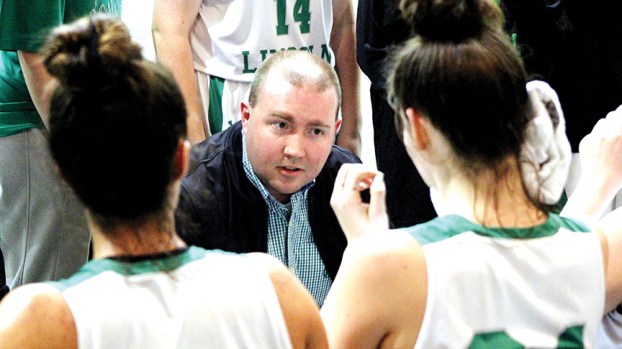 Photo by Cliff Furr West Lincoln coach Brooks Smith and his Bears split a pair of road games on Wednesday at Amite County. West Lincoln hosts Enterprise tonight in their final regular season home game of the season. The Lady Bears are 5-0 and sit atop the Region 7-2A standings.

The West Lincoln Bears split a rare Wednesday night matchup with Amite County in Region 7-2A in Liberty. In the girls’ game the Lady Bears (18-4, 5-0) stayed perfect in division play with a 55-14 dismantling of the Lady Trojans. In the boys’ game the Trojans got some revenge in their second meeting of the season with West Lincoln as they held on for a 51-42 victory over the Bears (12-10, 3-2).

“It was good to get back in the win column after losing at Pelahatchie last week,” said West Lincoln coach Brooks Smith. “Our focus is on finishing strong and being ready for the district tournament.”

The West Lincoln boys beat Amite County 69-60 in Jack Case Gymnasium the first time the two teams met on Jan. 11. On Wednesday night the Trojans took off for a 16-6 first quarter lead as they led throughout the game.

Junior center Keshon Byrd led the WL attack with 15 points, 13 rebounds, and six blocks. Senior guard Garrison Coffey added 13 points. Junior Karlton Byrd returned for the Bears after being out since Jan. 15 after sustaining an injury against Enterprise. Byrd scored 10 points in his return. Michael Brothern added four points for the Bears.

“Our lack of mental toughness in the first quarter proved to be the difference,” said Smith. “When we have that and play with effort, even when everything doesn’t go our way, we can hang with anyone we play. When we lack both mental toughness and aggressive effort, we struggle. I’m interested to see how we handle adversity moving forward.”

The Bears host Enterprise tonight in their final regular season home game of the season. They’ll close out with a pair of road games next week at Loyd Star and Bogue Chitto.