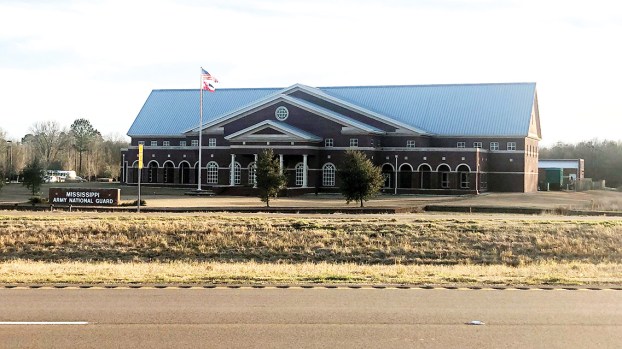 Photo by Kristi Carney The Monticello Army National Guard Readiness Center, located at Old Hwy. 27 and Hwy. 84, will welcome the HQ’s 184th Sustainment Command from Laurel and its Detachment 1, 184th SC, formerly of Hattiesburg. The Headquarters Detachment, 106th Support Battalion, is moving from Monticello to Hattiesburg.

Lawrence County will be the new home for the Mississippi National Guard Headquarters Company, which is moving from Laurel to the Monticello armory.

The Monticello Army National Guard Readiness Center, located at Old Highway 27 and Hwy. 84, will welcome the HQ’s 184th Sustainment Command from Laurel and its Detachment 1, 184th SC, formerly of Hattiesburg.

The news, announced Thursday by Maj. Gen. Janson D. Boyles, the National Guard adjutant general of Mississippi, will be good for the city.

“It will be a tremendous increase in presence at our National Guard facility and in the Town of Monticello,” said Mayor Martha Watts.

The Headquarters Detachment, 106th Support Battalion, is moving from Monticello to Hattiesburg. The battalion’s Company B, 106th BSB, formerly at Camp Shelby, is now based at the Laurel Army National Guard Readiness Center.

“The support of the cities of Monticello, Hattiesburg and Laurel have been huge keys to the success of the Mississippi National Guard throughout our history,” Boyles said. “These relocations will improve our efficiency and strengthen our readiness as we provide opportunities for citizens in each community to serve the state of Mississippi.”

The 184th SC and the 106th SB are currently deployed to the Middle East. The 184th SC arrived in Kuwait in December 2018 in sustainment support of Operation Spartan Shield — Inherent Resolve in Iraq and Syria, and Resolute Support in Afghanistan. The 106th SB is also in Kuwait and is providing sustainment, logistics and health care support for Mississippi’s 155th Armored Brigade Combat Team. Both units are heading back to the states in the spring after one-year mobilizations.

Brig. Gen. Clint Walker, commander of the 184th SC at Camp Buehring, Kuwait, is expecting a smooth transition to Lawrence County from Laurel and Hattiesburg.

“Our roots in both cities date all the way back to World War II, and we will never forget the sacrifice soldiers and families from these communities have made for the United States of America,” he said. “We look forward to our Monticello homecoming when we return from Kuwait, and getting to know our new neighbors. We are committed to building a relationship that will benefit both for years to come.”

Lt. Col. William Walley, commander of the 106th SB at Camp Buehring, Kuwait, said the move puts troops closer to Camp Shelby and their equipment and training areas. It will also allow an opportunity for Waynesboro residents to serve in the Guard as well.

“We’d like to say thank you to the city of Monticello for all the support they’ve given us throughout the many years we’ve been stationed in that location,” he said.

Watts said the move will create an economic boon for the area.

A one-star general will be on-site at the armory and weekends could see up to 200 troops in town for drills and activities. Watts expects at least a dozen families to move to Lawrence County as a result of the relocation of troops.

“The armory will be utilized for the capacity it was built for,” she said. “We will have that daily presence that will be 10 times or more than what it is right now.”

Watts said the community will continue to support the troops who use the armory in Monticello, whether they live here or are just passing through for drill.

Ceres goes ‘under the big top’ for charity ball