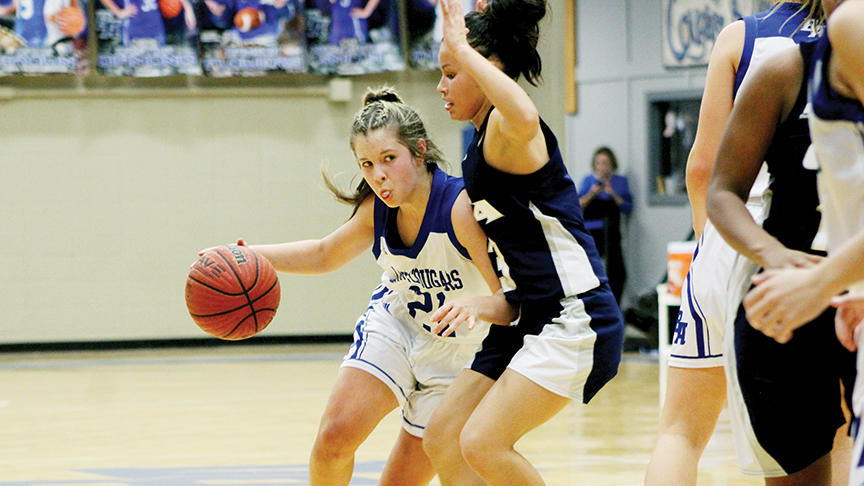 Photo by Cliff Furr Brookhaven Academy freshman point guard Anne Brantley Warren maneuvers around a Clinton Christian defender in the first matchup between the two teams. BA will go into the district tournament that begins next week at Newton County Academy as the no. 1 seed for both boys and girls.

Here is a look at the results from area high school hoops action on Thursday.

Both Cougar teams finished with perfect records in district play after sweeping Clinton Christian on Thursday at Mississippi College.

The boys’ game had a similar slow pace and again it was the Cougar (23-3, 6-0) who came out with a convincing win — 44-32. Senior forward Cade Brown led the Cougars with 18 points. Point guard Britton Nelson scored 11 points and Dawson Flowers scored six points and grabbed 11 rebounds.

BA now moves on the district tournament next week that will be hosted by Newton County Academy in Decatur.

The Loyd Star Hornets split a pair of road games in Eatonville on Thursday when they took on fellow 2A program North Forrest.

In the boys’ game the Eagles jumped on Loyd Star 20-9 in the first quarter as they took a 60-42 win. Dane Smith scored 13 points to lead the Hornets (15-8, 6-0). Stephen Mills was the only other LS player in double figures with 11 points. Zabien Price scored seven points. Micah Calcote and Reese DeHart added three points apiece. Jett Calcote and Zaycheous Vaughn scored two points each for the Hornets. Peyton Morse capped the LS scoring with one point.

Loyd Star has two huge home games to end the regular season when they host Region 7-2A foes West Lincoln and Amite County on Tuesday and Friday.