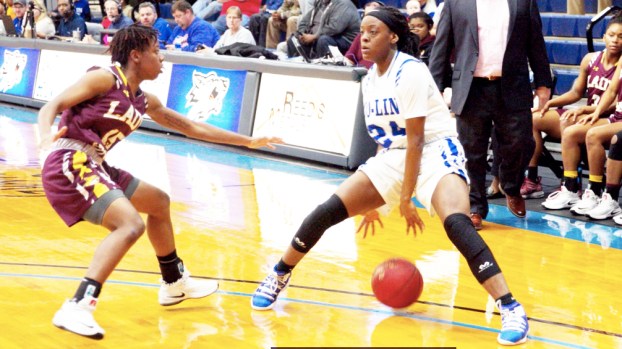 Photo by Co-Lin Sports Information Copiah-Lincoln sophomore guard T’Kyra Hicks goes between her legs with the dribble on Thursday night against Pearl River. Co-Lin currently sits tied with Pearl River and East Central for second place in the south division with identical 5-3 records. Co-Lin plays at Gulf Coast on Monday.

Lady Wolves get revenge over PRCC

The win was a refreshing turn of events for the Lady Wolves who had lost two straight. Co-Lin fell to PRCC earlier in the year, but the Lady Wildcats were no match on Thursday. The Lady Wolves are on the road next week as they travel to Perkinston to take on the Mississippi Gulf Coast Lady Bulldogs and are back in Mullen on Thursday as the team plays host to East Central Community College. Both games start at 5:30 p.m.

“Anybody can beat anyone in this league. Every game you get a chance to win, you need to capitalize,” said head coach Gwyn Young. “We were ready to play, but we need to do better rebounding and cutting down on turnovers. We played good on defense and had some spurts on offense where we played really well. It’s going to be a tough game on Monday…we have our work cut out.”

The Lady Wolves’ defense was very solid in the opening quarter as Co-Lin led 8-0 midway through the first 10 minutes. Co-Lin would not relinquish that lead for the entire contest. PRCC rallied back slightly with a pair of three-pointers and a second chance layup, bringing the score to 10-8 after one.

The second half was much of the same as Co-Lin’s lead mostly stayed in double-digits. PRCC made a run late in the third as they scored six straight to cut the lead to eight, 44-36, but once again Co-Lin doubled down and went on an offensive run on the other end to stretch the lead to 58-37.

Co-Lin hung on to that large lead for the remainder of the game and left Mullen with a 64-45 win.

Camryn Davis led Co-Lin in scoring and on the glass as she recorded her third double-double of the season after scoring 17 and grabbing 11 rebounds. Sha’Quandra Carter scored 14 for Co-Lin as she went 3-of-5 from three-point range. Carter also hauled in seven boards. TaMara Riley rounded out the top scorers with 12 points. Darien Tubby and T’Kyra Hicks passed the ball extremely well as the duo combined for 13 assists. Tubby posted seven to Hicks’ six.

Meah Monroe led PRCC with 10 points, the team’s only double-figure scorer, while Elexis Peyton led the Lady Wildcats with 10 rebounds.

Co-Lin falls to No. 9 Pearl River