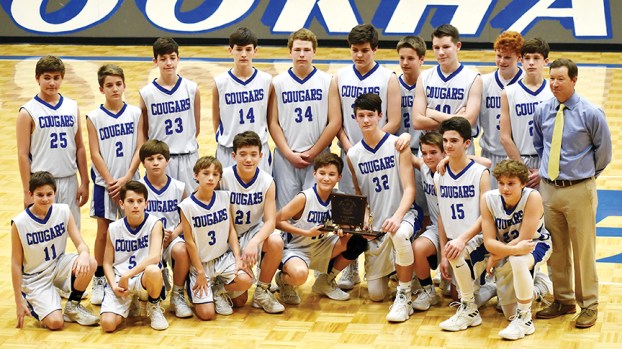 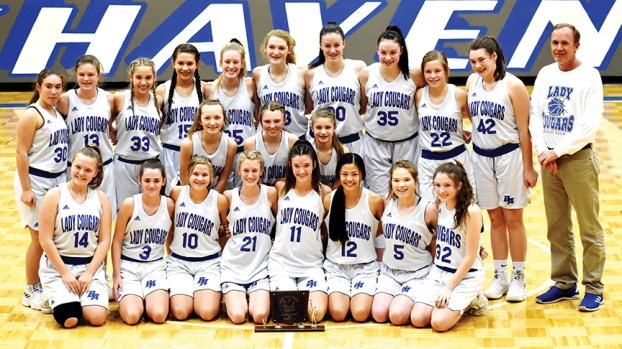 The Brookhaven Academy Cougars swept the MAIS District 3-AA junior high basketball championships on Saturday in John R. Gray Gymnasium. In the girls’ game the Lady Cougars won the tournament for the second straight year with a 46-28 win over Sylva-Bay Academy. The boys’ team also won back-to-back trophies with a 64-23 whipping of the Sylva-Bay Saints.

Freshman Madison Moak got the Lady Cougars cooking in the first half as BA blasted off from a 2-2 game to take a 15-2 lead after first quarter.

BA led 30-15 at halftime. Both teams scored six points in the third quarter and the Lady Cougars pushed their lead out with a 10-0 run to start the final period.

With five minutes to go, BA coach Jason Case emptied his bench as the Lady Cougars cruised to the win. By the time the game was over, everyone on the bench had the chance to get some playing time.

“It was a very enjoyable season,” said Case. “When you coach a group of girls that buy in to your philosophy, it makes coaching fun. It’s amazing how much they improved throughout the year and they deserve to be champions.”

Fortenberry scores 39 in first half as Cougars cruise

The boys’ game saw the junior Cougars (18-6) put on a shooting clinic as they racked up 50 points in the first half. Sylva-Bay tried to keep pace but were unable to match the Cougar offense.

“We played extremely well,” said BA coach Josh Watts. “The boys have progressively gotten better all year. We’re playing better now than we had all year, which is the way you want it to be. We ended up playing one of our better games today.”

BA ended the season on a 12-game winning streak after going 6-6 through their first dozen games.

The Cougars exploded for 25 points in the first quarter, while the Saints could only manage 13 points.

The second quarter would also see the Cougars score 25 points to lead 50-19 at halftime.

Freshman forward Tyler Fortenberry was unstoppable in the first half as he scored 39 points in the first two quarters. The Saints tried guarding the Cougars in a man-to-man defense and Fortenberry made them pay by during past his defender on trip after trip.