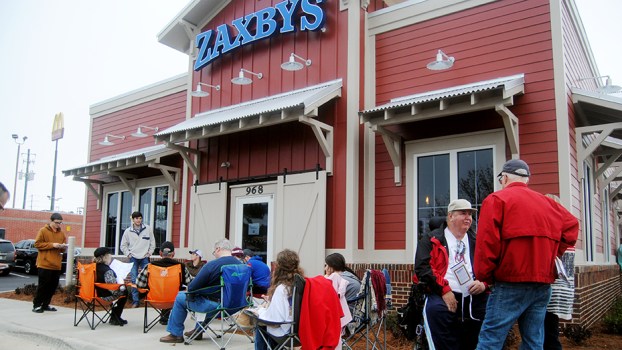 Photo by Kim Henderson The first 100 in line at the grand opening of Brookhaven’s Zaxby’s Monday received a coupon book — Zaxby’s Deck of 52 Dealz — filled with a year’s worth of free items. The new Zaxby’s on Brookway Boulevard is the 22nd in Mississippi out of 900 stores in 17 states.

Ever wondered what a sunrise looks like coming up over Brookway Boulevard? J.T. Thames and Fisher Warren can tell you.

“We got here, not intending to stay the whole night, but we did,” Warren told me from his folding chair outside the area’s first Zaxby’s restaurant. He and Thames are the “tent guys,” the ones who’ll have a lifelong story to tell about the night they spent in a parking lot in anticipation of Monday morning’s grand opening.

The two college students set up camp under the newly-placed business marquis at 7 p.m. the night before. Their closest competitor for the coveted first-to-enter position arrived 10 hours later.

The promised free things came in the form of a Zaxby’s “Fanatic Pack,” cards with food deals good for each week of the next year. For example, this week, it’s free wings. Come June, it’s free cookies. Later on, it’s white cheddar bites and sandwich meals. Bottom line, if all the cards are used, it’s a nearly $250 windfall for the first 100 customers.

But making the cut meant making it to the new location at 968 Brookway Boulevard well before the scheduled 10:30 a.m. opening. While the tent guys were the only ones with overnight gear, other customers-in-waiting got their game on with blankets, magazines, iPads and Gatorade.

“In case we work up a sweat,” the bottle owner explained from his lawn chair.

Several in the line winding around the periphery of the restaurant told me they had stepped away from work and school temporarily.

“You’re not going to take a picture, are you?”

Others, like 12-year-old McKinzlee Irving of Hazlehurst, brought books with her. “Language arts,” she giggled in response to my prodding. A band of preschoolers were on an educational bent, too. They sang their ABCs on cue until the costumed chicken mascot showed up for photo ops.

At one point, employees distributed menus among the crowd. I asked a gentleman in a motorized wheelchair if he spied anything good on its pages: “I haven’t seen nothing that doesn’t look good yet,” he chuckled.

Throughout the morning, drivers on the boulevard honked car and truck horns at the crowd. One family told me they had come for an adventure.

David and Trudy Haynes, at a respectable fifth and sixth place in line, agreed that watching their comrades’ antics — especially the free concerts by Thames and Warren — made their early-morning rising worthwhile. Thames and Warren entertained the crowd (and a 26,000 plus social media following) with a song Thames wrote for the occasion set to Johnny Cash’s “Ring of Fire” melody:

Waiting for them to open at 10 o’clock.

Eventually, owner Tyler O’Neill led the two in a round of Rock, Paper, Scissors to determine who would enter the new restaurant first. Guitar-playing Thames grabbed the spot.

“No extra prizes, though,” he explained with a broad smile. “Nothing but bragging rights.”

At 10:52 a.m. the first wave of 20 customers entered the building, but a computer snafu stalled the order counter. Meanwhile, gushing managers apologized, and sample trays flowed freely. The crowd and their chicken fingers (with complementary dipping sauce) didn’t seem to mind a bit.

Later, as they enjoyed the fruits of their labors, I asked Thames and Warren and the rest of the winners’ circle for comments. Third Place seemed to put it best: “Mama taught me not to talk with my mouth full.”

The hyped-up openings are a successful marketing strategy for Zaxby’s, along with clever slogans emphasizing the letter “z” – zattitude, zalads and zwigs (as in sipping/guzzling tea). The Athens, Georgia-based fast food chain is taking some heat for their latest advertising campaign, though. A recent Super Bowl ad appearing in some markets took a shot at competitor Chick-fil-A. The video shows former NFL player Jeff Saturday and former Major League Baseball player Rick Monday discussing where they can meet to eat chicken — on Sunday.

Many on social media perceived the message as offensive. New York Times bestselling author Jon Acuff twittered, “Whoa, did Zaxby’s just throw shade at @ChickfilA for being closed on Sundays?”

One commentator wrote, “You don’t need to mock your competitor for closing on Sunday. It’s a jab to Christians, which you seem to think is okay. If your food is better than the competition, focus on that. This ad leaves a bad taste in my mouth.”

Indeed. And you have to wonder: What will those clever cows do in response?

Kim Henderson is a freelance writer. Contact her at kimhenderson319@gmail.com

Twenty high school districts and community colleges, including Brookhaven High School and Co-Lin, have agreed to participate in a new... read more