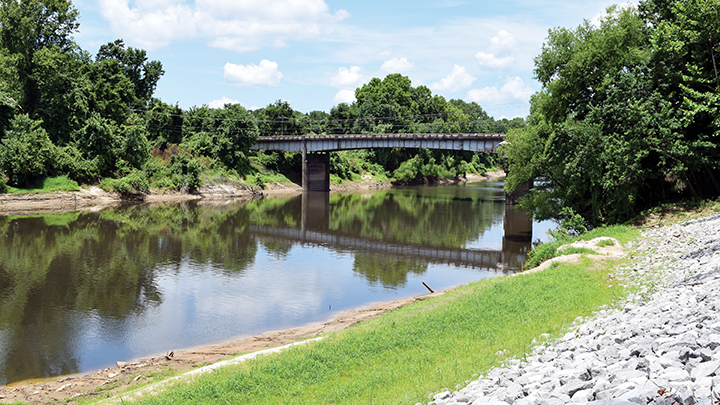 Photo by Adam Northam Several people in communities along the Pearl River are concerned about the impact of the One Lake project.

A group that opposes the “One Lake” project — an effort to create a 1,500-acre lake on the Pearl River in Jackson — said Tuesday that a study of the project shows serious public and environmental health risks.

The Mississippi Dept. of Environment Quality raised questions about water quality and called for additional analysis to determine how downstream water would be affected.

It’s the downstream impacts that have area governments worried. The Town of Monticello is one of 12 governments downstream from the proposed One Lake project that have passed resolutions condemning it. Others include Hancock, Lawrence, Marion and Pearl River counties; the Mississippi Department of Marine Resources; the Louisiana Legislature; St. Tammany and Washington Parishes in Louisiana; and the cities and towns of Bogalusa, Pearl River and Slidell, Louisiana.

The governments have also lobbied elected leaders and the U.S. Army Corps of Engineers against the project, and a coalition of environmental groups are aligned against it.

Those groups — Audubon Mississippi, Gulf Restoration Network, Sierra Club and Riverkeeper — released a statement Tuesday with information about hazardous sites either within or adjacent to the One Lake project’s footprint. They worry about contamination from these sites affecting water quality.

“The inadequacy of One Lake’s draft study continues to defy logic,” said Jill Mastrototaro, policy director for Audubon Mississippi. “It downplays serious public and environmental health threats posed by these contaminated sites, it offers few details on site cleanup, and it provides no plan to ensure that the health of Mississippians and our wildlife is adequately protected.”

U.S. Rep. Bennie Thompson has also opposed the project.  The project has plenty of supporters, however. The Greater Jackson Chamber Partnership contributed $200,000 to the project in 2012, and the Mississippi Development Authority threw in $1 million the following year. State lawmakers also gave the levee board authority to tax property around the project area.

The One Lake draft engineering report claims the new project will have no adverse effects on the Pearl River. The report also downplays the project’s environmental impact, which would drain around 1,000 acres of wetlands that provide habitat to a handful of endangered species that dwell along the Pearl River and nowhere else on Earth.

Monticello Mayor Martha Watts has been outspoken in opposition to the project. She’s worried about contamination by the City of Jackson’s wastewater discharge, among other things.

“The Savannah Street lagoon is going to be on our side of the weir, not the lake side. That’s not enough, in my opinion, to dilute what’s coming out of the lagoon,” Watts said. “That’s a disaster. Once they drain all these wetlands and dredge 25 million cubic yards out of the river, and find out this doesn’t work, it’s too late. There’s no going back.”

One Lake officials held public meetings on the project in Jackson, on the Coast and in Slidell, but none were held in the middle section of the river.

“I think that once they got wind of the amount of opposition down here they just decided to back off,” Watts said. “They have not made any pretense we will benefit, in any way, from this project. No one’s going to go along with it. Why would we?”

“The economics continue to stack up against this destructive proposal,” said Andrew Whitehurst, water program director for Gulf Restoration Network. “The project’s estimated $345 million price tag commits a paltry $8 million for cleanup costs. When compared to an ongoing 25-acre site cleanup in nearby Canton that cost $14.5 million, we expect the true cleanup of all the contaminated sites impacted by One Lake to cost tens of millions of dollars.”