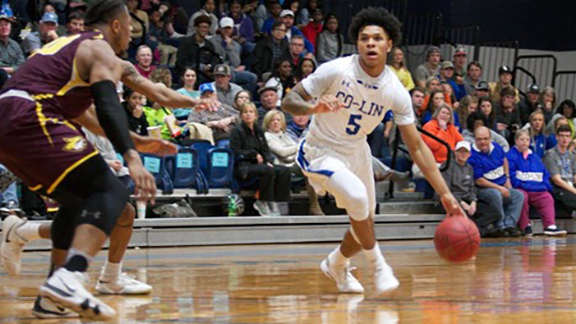 The Wolves of Copiah-Lincoln Community College battled hard for 40 minutes on Monday as they cut a 20-point deficit to just six in the final seven minutes of the game, but fell just short against the Mississippi Gulf Coast Bulldogs 75-67.

“My head is going to be up after this game, we are just going to go back to work tomorrow,” said Co-Lin head coach Kenny Bizot. “I know we didn’t shoot the ball the well, but we cut it down to six. We still have a lot of basketball to play and we still have an opportunity to go to the tournaments. We have to get our guys playing up to the level that I believe we are capable of playing.”

The first half seemed to go all in Gulf Coast’s favor for the first several minutes as the Bulldogs took a 12-point, 19-7, lead with 11:50 remaining in the opening 20 minutes. The Wolves bounced back and went on an 8-0 run with points from Cameron Woodall, Miles Daniels, Xavier Heidelberg and a big three-pointer from Lance Madison. The run cut the lead down to five, 25-20 with 5:53 remaining in the half. The Bulldogs then when on an offensive onslaught with an 11-2 run that stretched the lead up to 14, 36-22. Co-Lin continued to battle and clawed back yet again. Darius Kent hit a three-pointer with 2:47 left in the half, and the Wolves followed with another six straight points. Co-Lin trailed by just five, 36-31, going into the half.

The Bulldogs came out in the second half and quickly grew their lead to 20, 54-34, with 11:57 to play. Co-Lin fought back and hit some big three-pointers from Damarius Brooks and Daniels to not let Gulf Coast run away with the game. With 7:10 remaining in the contest the Wolves were still down 20, 63-43. Over the next six minutes, the Wolves would leave everything on the court as they forced several turnovers, grabbed key rebounds, and capitalized on trips to the free throw line. The tough playing began whittling down the Bulldog’s lead and with just 50 seconds remaining Co-Lin had cut it to six, 70-64. Unfortunately, Co-Lin could not get over that hump as the team had to resort to sending the Bulldogs to the free throw line to stop the clock. Gulf Coast hit the shots late and survived 75-67.

Kent had a career-high night as he posted 15 points off the bench for Co-Lin. The freshman was 3-of-5 from three-point range. Lance Madison scored 11 for the Wolves, while Daniels and Brooks finished with 10 each. Woodall led the team with six rebounds, while Xavier Heidelberg led the way in assists with five. Madison posted a team-best four steals.